Poetry in the Classroom - Spanish/English Poetry

Earlier in the month I wrote about food poetry where I included an excerpt from the book Sopa de frijoles/Bean Soup: Un poema para cocinar/A Cooking Poem, written by Jorge Argueta and illustrated by Rafael Yockteng. That got me thinking that English/Spanish poetry might be a good topic for exploring. 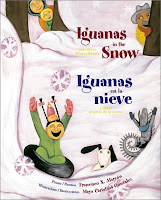 Several years ago while looking for some bilingual poetry for a student teacher, I stumbled across the book Iguanas in the Snow and Other Winter Poems/Iguanas en la nieve: y otros poemas de invierno, written by Francisco Alarcón and illustrated by Maya Christina Gonzalez. The vibrant art on the cover reeled me in, and once I was inside the magic of the poems enchanted me. Here's one I suggested she use with her ESL students, all recent immigrants, all Spanish-speaking.

Finding this first book of Alarcón's led me to the remaining books in his Magical Cycle of the Seasons series. Here's a poem found in From the Bellybutton of the Moon and Other Summer Poems/Del Ombligo de la Luna: Y Otros Poemas de Verano.
Poem ©Francisco Alarcón. All rights reserved.

Other titles in this series include Laughing Tomatoes: And Other Spring Poems/Jitomates Risuenos: Y Otros Poemas de Primavera and Angels Ride Bikes: And Other Fall Poems/Los Angeles Andan en Bicicleta: Y Otros Poemas de Otoño. All the books in the series are written by Francisco Alarcón and illustrated by Maya Christina Gonzalez. In addition to these titles, look for Animal Poems of the Iguazu/Animalario del Iguazu (also illustrated Gonzalez).

**UPDATED** - Check out Alarcón's original poem, On Monday I Feel Like a Dragon/El lunes me siento como un dragón, posted as part of the 30 Poets/30 Days celebration at GottaBook. 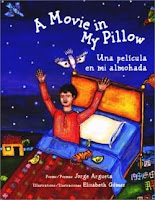 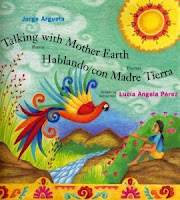 A Movie in My Pillow/Una pelicula en mi almohada, written by Jorge Argueta and illustrated by Elizabeth Gomez, is a series of poems based on his life when he first came to this country. Argueta's poems are so vivid that it is easy to imagine the sights, sounds, and smells of a new home. Here is an example.
Poem ©Jorge Argueta. All rights reserved.

A Movie in My Pillow/Una pelicula en mi almohada was Argueta's first book for children. Published in 2001, it went on to win the Américas Book Award for Children's and Young Adult Literature. To see examples of the artwork and read some additional poems, you can preview the book at the International Children's Digital Library.

Talking with Mother Earth/Hablando con madre tierra: Poems/Poemas, written by Jorge Argueta and illustrated by Lucia Angela Perez, allows readers to experience the depth of Argueta's roots in El Slavador and his strong connection to the people and the land. The poems in this collection cover a range of topics. Here is one of my favorite poems from the book.

The corn's spirit
becomes delicious and happy
when we plant its tiny seeds
in Mother Earth.

After four days
the corn sprouts.
At first it is like a little worm
stretching, searching for the sun's light.

Later a leaf is born
from the stem
thin as a thread
sweet and green like a caress.

The plant keeps growing and growing
till from its center comes an ear of corn
a bearded child
laughing with all its teeth.

When I finally eat it
in tortillas
or tamales or atol
I start to smile like the corn. 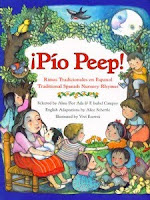 Finally, for younger children I recommend ¡Pio Peep! Traditional Spanish Nursery Rhymes, selected by Alma Flor Ada and F. Isabel Campoy, with English adaptations by Alice Schertle, and illustrations by Vivi Escriva. Here is an excerpt from the introduction of the book to provide some background for this collection.

Hispanic oral folklore is very rich. Its winged words have conveyed families' cultures and traditions from generation to generation. Some rhymes and songs have remained nearly intact along their extensive journeys on both sides of the Atlantic. Others have been enriched by the contributions of the various groups that make up the Hispanic world. All provide joy and delight in our heritage.

In the twenty-first century, this cultural wealth is reaching new frontiers. More than thirty-five million Latinos contribute their traditions to the cultural mosaic that is the United States.

This book offers a small sample of this wealth, presented in two languages so that it can be meaningful to both Spanish and English speakers. To preserve the charm of the original rhymes, the English version is not a translation but a poetic re-creation. In some instances, the details are different, but the re-creation remains true to the essence of the original.

Here is one of the 29 rhymes in the collection.

The sun's a gold medallion.
The moon's a silver ball.
The little stars are only tin;
I love them best of all.

You can read more of the introduction and preview some of the text at the Harper Collins web site.

If you are looking for additional resources on bilingual poetry or picture books, check out some of these links.
Have I missed a favorite volume of Spanish/English poetry? If so, please let me know.
Posted by Tricia at 5:08 PM