Poetry in the Classroom - Just Haiku

While many poetry collections include a variety of forms, I am somewhat partial to those that focus on a particular form. There are several wonderful titles written entirely in haiku. 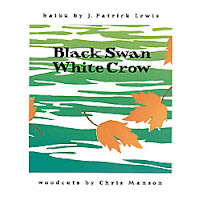 Black Swan/White Crow, written by J. Patrick Lewis and illustrated by Christopher Manson, is a collection of 13 poems accompanied by woodcut illustrations. The words and images are spare and beautiful, fully complementing each other. In the introduction, Lewis describes the form and encourages readers to write their own haiku.

To write a haiku, you might go for a walk in a city park, a meadow, the zoo. Put all your senses on full alert. Watch. Listen. Imagine that what you are seeing or smelling or hearing has never been seen, smelled, or heard before--and may never be again. Now take a picture of it--but only with your words.

The best haiku make you think and wonder for a longer than it takes to say them.

I've always loved that last line. Here's one of the haiku I still think about, especially when I'm at the beach. 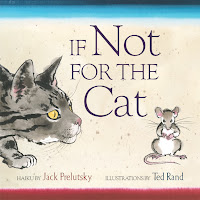 Hands-down my favorite work of Jack Prelutsky's is If Not For the Cat, illustrated by Ted Rand. The seventeen haiku in this book encourage readers to see animals in new ways. Without sharing the illustrations these can be read as "Who am I?" poems. Can you guess which animals are described in these two poems?

Gaudily feathered
With nothing at all to say,
I can't stop talking.


Wingless we went in,
But we emerged as fliers--
And oh, such colors! 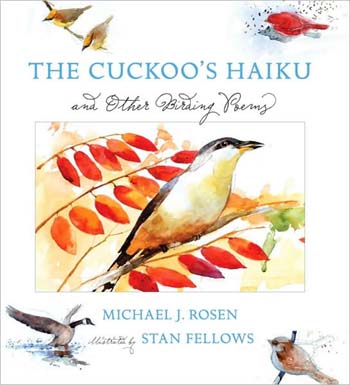 The Cuckoo's Haiku: and Other Birding Poems, written by Michael J. Rosen and illustrated by Stan Fellows, uses haiku to introduce a range of birds by season. Looking much like a field journal, this beautifully written and constructed volume introduces readers to more than 20 common American birds. Here are two of my favorite poems. (Please note that the poems in the book are not titled. I have highlighted them this way only as a means of organization.)

I've mentioned some lovely haiku poetry books in other posts this month. Here's where you'll find them.
Here are some resources for reading and writing haiku that may interest you.
Have I missed a favorite haiku book or resource? Please share! I'd love to hear your ideas.
Posted by Tricia at 11:06 AM