Poetry in the Classroom - A Red Wheelbarrow, LOVE THAT DOG, and William

Last year during the month of April I noticed that my son was writing poems in his class journal. When I asked why he told me that he was listening to his teacher read Love That Dog and that as part of the experience she had encouraged the students to find and write poems in their journal. This was my son's first entry. 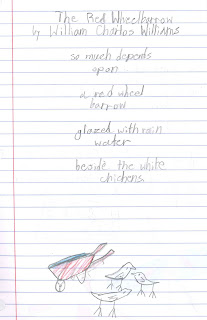 I was not surprised to see The Red Wheelbarrow. My son does share the author's name (William), and that's a big deal for a kid, so that may have been a motivating factor. However, it is the first poem in the book that Jack talks about. Here's what he had to say.


Excerpt from Love That Dog
by Sharon Creech

I don't understand
the poem about
the red wheelbarrow
and the white chickens
and why so much
depends upon
them.

If that is a poem
about the red wheelbarrow
and the white chickens
then any words
can be a poem.
You've just got to
make
short
lines.

It only makes sense that a child reading or hearing this would wonder about the poem and might want to learn more. When I asked William why he chose the poem, he simply stated that he liked it, even though it didn't rhyme.

I suppose we could ask that question of any poem. Why do you like it? It's such a personal question and the answers are nearly as varied as the poems themselves. I like this poem for its economy, the rhythm of the words as they roll off my tongue, and for Williams' ability to make something ordinary so very extraordinary. 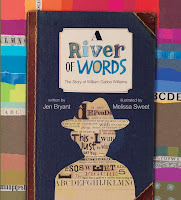 I think Williams is a perfect poet to introduce to students because of the visual imagery in his poems and his mastery of language. While I love The Red Wheelbarrow, I'm equally fond of Blizzard, Between Walls, Metric Figure, and Winter Trees, all poems that could easily be shared in the classroom.

Williams is a fascinating study, and no teacher introducing his poetry should be without the wonderful picture book biography A River of Words: The Story of William Carlos Williams, written by Jen Bryant and beautifully illustrated by Melissa Sweet. (If you are interested in using this book in the classroom you can download a very helpful teacher's guide from the Eerdmans website.) You can even listen to Williams reading some of his poems after exploring the book.

One can't think of W. C. W. without mentioning what some call "the dreaded plum poem." I happen to like This is Just to Say. Was the speaker truly remorseful? It's hard to say. Would I have forgiven the writer? Eventually, but I would have been really aggravated to find and read that note. I can just imagine it scribbled on a Post-It note stuck to the refrigerator. (See, visual imagery!) After sharing this poem there's no way you could skip a reading of Joyce Sidman's incredible book This Is Just To Say: Poems of Apology and Forgiveness. This book is a direct result of Sidman's work as a writer-in-residence at schools, where she uses the poem as a model. The book is written in the voices of school children and is organized in this fashion.
There is a wealth of material here, with seventeen apology and seventeen response poems. The topics and emotions related are those that any child today might deal with. Joyce has provided a particularly useful reader's guide at her web site. You can also listen to her read some of the poems.

So, in a short time I've touched on a verse novel by Sharon Creech, the poetry of William Carlos Williams, a picture book biography by Jen Bryant, and the poetry of Joyce Sidman. Phew! Here are some additional resources to help you put all these ideas together and perhaps come up with some instructional ideas of your own.
If you use any of these books or poems in your classroom, please let me know. I'd love to hear your ideas.
Posted by Tricia at 12:01 AM