Poetry in the Classroom - The Trip Around the Sun

We just finished discussing the teaching of time in my Foundations of Math Instruction class. This includes not only the mechanics of telling time on a clock, but also discussions of the calendar. In 2008 I wrote a poetry in the classroom post entitled Through the Year. In it I shared three very different collections of calendar-focused poetry. This time around I have three more titles to share. 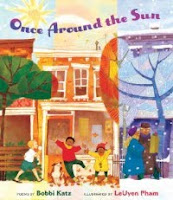 Once Around the Sun, written by Bobbi Katz and illustrated by LeUyen Pham, is a collection of 12 poems that take readers through each month of the year, exploring universal themes along the way. January finds children sledding, June preparing for summer vacation, September back-to-school, and October is Halloween. My favorite poem is for August, my birthday month!

August is
when it's so hot
that even ants sweat
and the praying mantis
shuttles its rakes
along the whisker-rough stem
of a sunflower
that is trying to tickle
the sky. 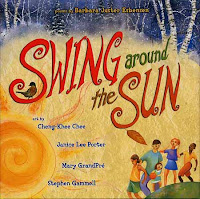 Similarly titled, but organized differently is Swing Around the Sun, written by Barbara Juster Esbensen and illustrated by Cheng-Kee Chee (spring), Janice Lee Porter (summer), Mary GrandPré (fall) and Stephen Gammell (winter). This collection, while first published in 1965, was re-released in 2002 with fewer poems (5 per season) and illustrated by four Minnesota artists. As with Katz's collection, this one also relies on well-known symbols of the seasons--umbrellas and robins in spring, fireworks in summer, apples in fall, and snow and skating in winter. Since it rained today, this spring poem seems appropriate.

Umbrellas bloom
Along our street
Like flowers on a stem.
And almost everyone
I meet
Is holding one of them.

Under my umbrella-top,
Splashing through the town,
I wonder why the tulips
Hold umbrellas
Up-side-down!

The poems of Issa round out the third book on this list. In Today and Today, illustrated by G. Brian Karas, Karas has selected 16 poems of Kobayashi Issa's and woven them into a story. Here's what Karas says about his work.

In my artwork, I have tried to achieve visually what Issa achieves with words, to convey the precise feeling of each moment so that someone else might feel it, too. The buzz of a hot summer day or big wet snowflakes hitting your face--it is ordinary, extraordinary moments like these, strung together, that make up our lives.

The haiku and illustrations are beautifully paired and tell the poignant story of a family over the course of a year. Divided into seasons, the collection opens in the spring. Here are two poems from the first two seasons in the book.

Once snow have melted,
the village soon overflows
with friendly children.


So many breezes
wander through my summer room:
but never enough

All three of these books are fine choices for exploring the months and seasons of the year.

If you are looking for additional resources for studying the calendar in your classroom, check out these sites.
There are many other terrific poetry books for use in discovering the seasons. I'll share a few more later this month, including Lee Bennett Hopkins' 2010 anthology Sharing the Seasons and the seasonal acrostic books of Steven Schnur.
Posted by Tricia at 9:35 PM