Poetry in the Classroom - Of Castles and Commoners

My son is enamored of dragons. With this love comes an interest in all things knightly. He builds castles and catapults, wields a plastic sword like a knight of old, and longs to visit a castle one day. Medieval times are often viewed through a romantic lens by children today, but the time was anything but an easy one for most people. There are many great pieces of historical fiction that accurately describe the hardships of medieval life, but poetry can do this too! 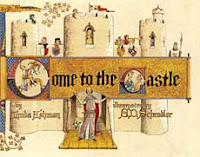 Come to the Castle: A Visit to a Castle in Thirteenth-Century England, written by Linda Ashman and illustrated by S.D. Schindler, is a fun, witty and thoroughly educational look at the past. The Author's Note in the back of the book is where I'm going to start and where you should start while reading aloud.

Several years ago, I became curious about life in the Middle Ages. In particular, I wondered what it might have been like to live in a castle at that time. As I focused my research on thirteenth-century England, distinct characters began to emerge in my mind: a wealthy but dim-witted lord; his overworked steward; his beleagured staff; his intelligent daughter, forced to endure the attentions of various unappealing suitors. These characters are fictional, of course, and I've taken some poetic license for the sake of humor an drama (for example, the planning and execution of the tournament is compressed into a matter of days). Still, in writing these poems, I've tried to give a fairly accurate glimpse of castle life during this period.

Readers meet a cast of twelve characters, beginning with The Earl of Daftwood. His poem sets the stage for the action and introduction of folks who live and work in the castle. To remedy the tedium that is his life, he commands his steward to plan a tournament.

Steward, plan a tournament?
The Earl is surely daft!
Though he has countless servants,
I am vastly understaffed,
Overworked, and truly weary
Of his constant recreation
(Oh, how I'd love a nice massage
and several weeks' vacation!)

Next, the herald heads off to deliver the invitation.

A Feast at Daftwood Castle--
Lord and Ladies, come and dine!
We'll keep you fed and entertained
And plied with ale and wine.

We promise jousts and dancing
(And perhaps a messy brawl).
A guarantee of revelry--
Come join us, one and all!

Preparations are made by the lady of the castle, while the cook begins to prepare the feast. The the cleaning servant prepares the hall and the dishes, while the gong farmer cleans the privy. The knight prepares for battle, and once the guests arrive he engages in the joust. The meal is eaten, the jester performs, and all hell breaks loose before the dancing begins. The following day the doctor checks on their aches and pains.

The source of their illness?
A monkey could guess:
They stuff themselves silly and drink to excess.
But it is my duty to see them to health--
And, frankly, it adds to my burgeoning wealth!

It is the Earl who brings things to a close by reviewing the recent events and recommending. . . another tournament!

Illustrated in the style of an illuminated manuscript, the book is a literary and visual feast. The cast of characters are more fully described in the author's note, providing just a bit more information for readers. After reading this one, let your readers explore Kids Castle. While the links to the Great Hall and Tournament relate directly to the poems, kids can click on Lord Sherwood's Rooms, the Chapel, Gatehouse, Royal Apartments, Stables, Dungeon and much more to learn even more about castle life.

While the next book isn't poetry (it's cataloged in plays and drama), it's awfully close. Good Masters! Sweet Ladies!: Voices From a Medieval Village, written by Laura Amy Schlitz and illustrated by Robert Byrd, is a collection of 21 plays (19 monologues and 2 dialogues) of 23 different medieval children. Most are written in verse. Here's an excerpt from the Foreword that helps set the stage.

I wrote plays about children because I was writing for children. I say children, but the people in these plays are not all the same age. I imagine them being between ten and fifteen years old -- you'll have to decide for yourself how old each character is. Some are the sons and daughters of the nobility; others are paupers. Some of the characters know one another, as they all live in or near the same manor.

Turn the page and you'll find yourself exploring a map, a glorious double-page spread that shows the medieval manor and surrounding lands. The characters are placed on the map and labeled so that you know where they live in relation to the manor house and whether they are inside our outside its walls. Readers then meet the following young people.
Just reading through them begs some questions. What's a sniggler? A varlet? A mud slinger? All questions are answered in the voices of the children. Here's how Lowdy's monologue begins.

Father is a varlet, and the varlet serves the lord.
He feeds and tends the master's hounds
And takes a fair reward.
I've helped clean the kennels,
Held the puppies on my knees,
I love the dogs, but God's bones!
The house is full of fleas!

Lowdy, like the other characters, speaks honestly and fearlessly about the life she lives. The words of the speakers are powerful and provide a realistic view of life at the time. While some of the language can be unfamiliar, Schlitz uses footnotes that appear along the margins of the pages to explain vocabulary and provide background readers may be lacking. For example, the footnote for varlet reads:

Varlet has come to mean a scoundrel, but in the Middle Ages it referred to a man who looked after animals.

Breaking up the plays are a series of pages entitled "A Little Background." These pages cover such topics as the three-field system, medieval pilgrimage, the crusades, falconry, Jews in medieval society, and towns and freedom. Readers will learn much from these short informational sections, the footnotes, and the plays themselves.

Here are some resources to extend your castles and commoners explorations.
Do you have more ideas on this subject? Please share! I'd love to hear what you think.
Posted by Tricia at 6:48 PM