I have been teaching a course on integrating science and social studies for several years now. While I often get puzzled looks from folks when I try to explain the rationale behind this, the elementary teachers I work with recognize that this makes perfect sense. There is tremendous overlap between the science and social studies curriculum, particularly with respect to the topic of geography.

Today's book pairing will help readers look at the world through the eyes of both scientists and geographers. 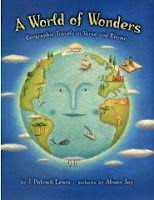 A World of Wonders: Geographic Travels in Verse and Rhyme, written by J. Patrick Lewis and illustrated by Alison Jay, is a collection of poems about explorers, places on the map (Sandwich Islands, Italy, Angel Falls, Mount Everest etc.), the globe itself (latitude v. longitude, equator and the poles), earth science topics (aurora borealis, San Andreas fault, stalactites v. stalagmites), and many other things. It opens with a poem entitled Places and Names: A Traveler's Guide, in which a number of cities and sites with interesting names are named. The poem concludes in this way.

Thousands of spaces are places to be--
Discover the World of GE-OG-RA-PHY!

Travel by boat or by car or by plane
To visit East Africa, Singapore, Spain.
Go by yourself or invite a good friend,
But traveling by poem is what I recommend.

This is a wonderful book for introducing a mix of geography topics, as well as science topics like biomes, ecology and natural resources. Here's one of my favorite poems.


The Arctic and Antarctica: Which is Colder?

The Arctic is water all covered with ice.
Antarctica? Land (frozen paradise).

The Arctic is up; Antarctica's down—
At least if you reckon from my side of town.

Nobody could live in the Arctic because
It's freezing! (Except maybe Santa Claus?)

Antarctica is even chillier than that,
According to the icicled thermostat.

Why? Because land becomes colder than water.
(But penguins that live there don't want it much hotter.)

Here's a short example of a science-oriented geography poem.

How a Cave Will Behave

Take a look at these cone-like formations,
And remember, wherever they're found,
A stalactite drips down from the ceiling.
A stalagmite grows up from the ground.

There are also a few poems that encourage readers to think about their impact on the earth. The last poem entitled Walk Lightly asks that we make the Earth our companion. 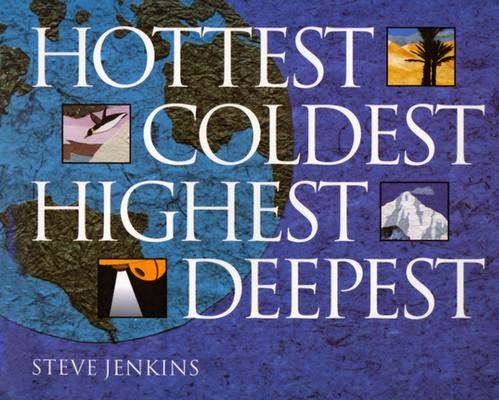 Hottest, Coldest, Highest, Deepest, written and illustrated by Steve Jenkins, is a book that examines extremes in the natural world, such as the highest mountain (based on elevation), longest river, place with the most extreme tides, the driest place on earth, and more. Here's how it begins.


If you could visit any spot on earth, where would you go? What if you wanted to see some of the most amazing natural wonders in the world?

There are deserts that haven't seen rain in hundreds of years, and jungles where it pours almost every day. There are places so cold that even in the summer it's below freezing and spots where it's often hot enough to cook an egg on the ground. There are mountains many miles high and ocean trenches that are even deeper. You can find rivers thousands of miles long and waterfalls thousands of feet high.

Jenkins grabs readers from the first page and makes them want to know about them. On every double-page spread that follows is a statement of fact, an inset map showing location, a bit of informational text, and some other graphic to help readers visualize and better understand the information. Here's an example.


The world's highest waterfall is Angel Falls, in Venezuela. It is 3,212 feet high.

This text is accompanied by a small map and globe with a red dot highlighting the falls. The facing page contains this statement.


Angel Falls is more than seventeen times higher than Niagara Falls (180 feet), in New York State. Victoria Falls, in Zimbabwe, Africa, carries ore water than any other waterfall. It is 355 feet high.

That's a lot of information packed into a few sentences. What ties all these ideas together is the final graphic that shows a height comparison of Angel Falls, Victoria Falls, Niagara Falls, and the Empire State Building. Placing these side-by-side shows just how high Angel Falls really is.

Okay, time for a little quiz. Do you know...?
The answers to these questions and more can be found in Jenkins' handsomely illustrated book. There is no back matter in this volume, but the final page does include a world map that pinpoints the 12 locations described.

Perfect Together
Both Lewis' poems and Jenkins' pages on extremes lend themselves to mapping activities. I highly recommend a permanent board (or a trifold if you lack space) with a world map in which students can place push pins or "markers" to identify locations studied. This works not only for these books, but also for places identified in current events and others books students read.

I also recommend laminating the map or placing a layer of plastic over it so that students can label and color areas of the map. For example, Jenkins writes about the hottest spot on the planet. Lewis has a poem entitled 136ºF in the Shade that describes the hottest day ever recorded in history. Lewis also offers up a rhyming couplet describing the size of the Sahara Desert and a poem on the Mohave Desert. While reading these poems, students can research other deserts of the world and color all of them on the laminated map. From here they'll be able to draw some conclusions about the characteristics of deserts and the geographic features they share.

Both of these books offer up a wealth of information that can and will keep students occupied over the course of the year. Just imagine what you can do if you devote one day a week to these kinds of geography/science activities.