Poetry A-Z: C is for Collaborative

I love reading poetry, but I like it even better when it's read aloud. I like the sound of the rhyme, the feel of the meter, and the way words swim around inside my head before escaping from my lips. Poetry was spoken aloud long before it was written down. Since poetry comes to us today on the page, we often forget that. Poetry needs to be read AND heard. So open a book of poems and shout out a favorite poem. Better yet, grab a partner and try reading together.


COLLABORATIVE - produced or conducted by two or more parties working together 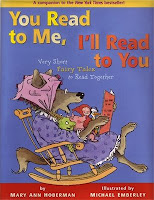 I am quite fond of all the books in Mary Ann Hoberman's You Read to Me, I'll Read to You series. Titles include:
Told in two voices, these rhyming stories are meant to be read loud. Each story appears in three colors--one for the first voice/reader, another for the second voice/reader, and a third for when both voices read in unison. When I wanted to encourage my son to read aloud and wanted to introduce more poetry into his book diet, we started with the Very Short Fairy Tales. He's in middle school now, but I'll admit we still pull this one and Short Scary Tales off the shelf every so often. Here's an excerpt from Very Short Fairy Tales.

Messing Around on the Monkey Bars: And Other School Poems for Two Voices, written by Betsy Franco and illustrated by Jessie Hartland, is a collection of school poems that takes readers on a ride around the school and schoolyard, beginning with the school bus and ending with the final school bell. In between there are poems about lunch money, homework, recess, the library and more. In the author's note Franco says "Though these poems can be read silently and enjoyed by a single person, they are the most fun when read aloud by two people." This is followed by a graphic that shows what the voices look like. In the poem below, the plain font is Voice 1, the bold font is Voice 2, and the larger bold font is for both voices to speak at the same time.


Messing Around on the Monkey Bars

Time for recess!
Here we are,

messing around
on the monkey bars!

Hand over hand,
fast or slow,

calling to
our friends below.

dangling down
by just our knees.

Swinging up
above the ground,

missing bars
and tumbling down.

Hooting, howling,
here we are,

messing around
on the monkey bars!

For information on how to use this book in the classroom you can download a teacher's guide for Franco's book. 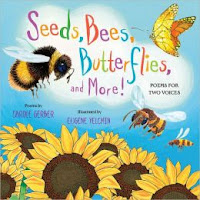 Seeds, Bees, Butterflies, and More!: Poems for Two Voices, written by Carole Gerber and illustrated by Eugene Yelchin, is a collection of 18 poems that explore nature close up. As these are poems for two voices, one person reads the lines on the left, while one reads the poems on the right. The parts are in different colors, making it easy to differentiate. Lines in the center of the page with letters in both colors are meant to be read simultaneously. The poems are a perfect blend of science and poetry, highlighting pollination, germination, seed dispersal, metamorphosis, and much more.  Here's an excerpt. 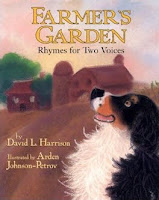 Farmer's Garden: Rhymes for Two Voices, written by David Harrison and illustrated by Arden Johnson-Petrov, is a collection of poems in which Farmer's dog converses with some of the animals and plants he meets in the garden. The 15 poems are short, generally two-to-four lines per stanza, and are printed in two fonts that clearly show where the lines alternate between the two speakers. Here's an example.

Beetle, Beetle,
why so fast?

Out of my way!
I must get past!

Beetle, Beetle,
where do you run?

Away from the lizard
and out of the sun.

Beetle, Beetle
what will you do?

Joyful Noise: Poems for Two Voices, written by Paul Fleischman and illustrated by Eric Beddows, was the recipient of the 1989 Newbery Medal. The book begins in this way.


The following poems were written to be read aloud by two readers at once, one taking the left-hand part, the other taking the right-hand part. The poems should be read from top to bottom, the two parts meshing in a musical duet. When both readers have lines at the same horizontal level, those lines are to be spoken simultaneously.

From here, readers/speakers must jump right in. As a former member of a crew team, the poem Water Boatmen particularly appeals to me. All the poems in this book celebrate the lives of insects, from grasshoppers and honeybees to moths and fireflies. The poems are indeed joyous to recite.

Big Talk: Poems for Four Voices, written by Paul Fleischman and illustrated by Beppe Giacobbe, takes the ideas presented in Joyful Noise and ramps up the volume (and chaos) to four voices. There is no particular theme to these poems, but they are fun and will appeal to a wide range of readers/speakers. In describing the book Fleischman said, "Families used to play games together and make music together. We did both all through my childhood. I wanted to give families something they could perform together—not in Carnegie Hall, but around the table." You can download an article about the book and learn more about how the poems were inspired. Instead of voices reading columns of information, readers this time find their parts on colored bars, reminiscent of reading music. Don't fret if you don't have this skill, as clear instructions for reading are included.


That's it for C. See you tomorrow for some B inspired poetry ponderings.
Posted by Tricia at 12:01 AM