Poetry A-Z: O is for Odious

Before we begin, I must make one thing perfectly clear. The word today does not describe the poems, but the SUBJECT of the poems. (Silly readers! Like I would make you suffer through terrible poetry!)

This is a fabulous word! I'll bet you're wondering just what kind of poems are written about odious things. Well wonder no more! 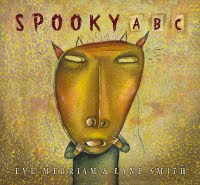 Spooky ABC, written by Eve Merriam and illustrated by Lane Smith - Originally published in 1987 as Halloween ABC, this book is haunted by bats, nightmares, skeletons and loads of other spooky things. Here's an excerpt from the poem for the letter W, entitled Witchery.


Which, which,
which woeful bane?
Juice of the hemlock
or brimstone with rain?

Which, which,
which plaguey pox?
Soup bowls of toadstools
or mouse broth in crocks?

This poem is accompanied by a bubbling cauldron with clawed feet. *Shiver* The illustrations by Lane Smith are just as terrific as the poems. (Read a short review.)

Grimericks, written by Susan Pearson and illustrated by Gris Grimly - Limericks on all manner of monsters appear in this fun volume of poems. It begins with this poem.


Dear Reader, please lend me your ear.
If ghosts, ghouls, and goblins you fear,
don't open this book.
No--don't even look!
There are spooky things hiding in here.

You'll find incompetent and unlucky witches, mummies, skeletons, banshees, and more. Grimly's illustrations are full of (appropriately!) grim humor. At Google Books you can preview some of the images and poems. 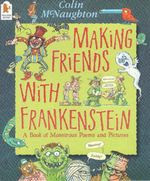 Making Friends With Frankenstein: A Monstrous Book of Poems and Pictures, written and illustrated by Colin McNaughton - How can you not love a book with an opening poem entitled Cockroach Sandwich?

Cockroach sandwich
For my lunch,
Hate the taste
But love the crunch!

There are poems on monster parties, cyclops, bullies, an ooze-zombie, doom merchant, ogre's, a few dinosaurs, and LOTS more. This one is just chock full of fun stuff. Ode to the Invisible Man always makes me chuckle, and Transylvania Dreaming makes me want to sleep with the light on.

The Gargoyle on the Roof, written by Jack Prelutsky and illustrated by Peter Sís - Beautifully illustrated by Sís, this one includes poems that run the gamut from funny to spooky. You'll meet vampires, werewolves, gargoyles, gremlins, a basilisk, the Headless Horseman, a lonely troll, and more. Here's the first stanza from one of the poems.


My Sister is A Werewolf

My sister is a werewolf,
It's disquieting and strange.
One moonlit night I watched her
Undergo a sudden change.
Her arms and face grew hairy,
And her voice became a roar.
In some ways she looked better
Than she'd ever looked before. 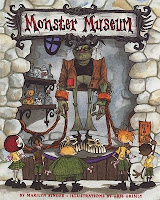 Monster Museum, written by Marilyn Singer and illustrated by Gris Grimly - What happens when a group of children follow a docent (an undead one at that!) through a monster museum? Are Frankenstein, Dracula, Bigfoot, Medusa and others wax replicas? Or are they something else? Grimly's illustrations are terrific and reward those who take the time to study them. Here's the beginning of one of my favorite poems.

They gave me a bride,
And even some pride.
But they never did give me a name. 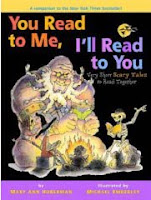 You Read to Me, I'll Read to You: Very Short Scary Tales to Read Together, written by Mary Ann Hoberman and illustrated by Michael Emberley - This is the fourth title in the very popular series. I know the title says tales, but they're all written in rhyme and so much fun to read aloud with a friend! Included here are spooky tales of mummies, skeletons, witches, zombies, ghosts, and more. 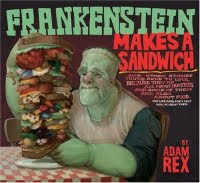 Frankenstein Makes a Sandwich and Frankenstein Takes the Cake, both written and illustrated by Adam Rex - Kids will love the high jinks and hilarity found when Frankenstein makes a sandwich, Dracula gets spinach stuck in his teeth, the Phantom of the Opera gets an annoying song stuck in his head, Frankenstein gets married, the Headless Horseman writes a blog, and so many other wonderful things! Don't miss either of these gems. There are just as many jokes in the illustrations as the poems, so do take the time to enjoy them. (Read an interview with Adam to learn more about these books.)

The Monsterologist: A Memoir in Rhyme, written by Bobbi Katz and illustrated by Adam McCauley - Meet some of the world's most famous monsters -- Count Dracula, Godzilla, King Kong, Medusa, Grendel, the Loch Ness Monster, the Yeti -- in this collection of poems in the form of letters, notes, interviews and other objects from a lifetime of studying monsters. Here's an excerpt from the poem Meet a Monsterologist.


But ...
if monsters are what interest you,
the how and why of what they do,
I know the facts: What's false, what's true,
since I'm a monsterologist.

I've traveled all around the world
to study and observe.
At times I have been terrified
but I've never lost my nerve.

Check out the Monsterologist web site for a bit of fun. You can also read an interview with Bobbi Katz.

That's it for O. See you tomorrow with some N inspired poetry ponderings.
Posted by Tricia at 12:01 AM