Poetry A-Z: U is for Ursine

When I was in college one of the most interesting classes I took was celestial navigation. I was a sky watcher long before this, but a class that combined my love for maps with a love of the stars seemed a match made in heaven.

Ever since that time I've loved the word ursine (think Ursa Major if you don't know what it means). Given my love for this word, it is my topic for the letter U.


URSINE - of or pertaining to a bear or bears 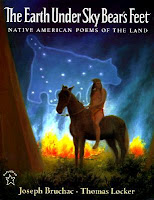 THE EARTH UNDER SKY BEAR'S FEET: NATIVE AMERICAN POEMS OF THE LAND, written by Joseph Bruchac and illustrated by Thomas Locker, is a collection of 12 poems telling what Sky Bear (the Big Dipper) sees and hears as he circles the Earth each night. Each of the poems comes from the tradition of a different tribe. Includes poems inspired by the Anishinabe, Chumash, Cochiti Pueblo, Inuit, Lakota, Lenape, Missisquoi, Mohawk, Navajo, Pima, Pawnee, and Winnebago. Navajo, and Pawnee. In an author's note at the end, Bruchac explains the stories that inspired the poems. Here's the poem about Ursa Major.

Long ago,
three hunters and their little dog
found the tracks of a giant bear.
They followed those tracks
all through the day
and even though it was almost dark
they did not stop, but continued on.
They saw that bear now, climbing up
a hill, which glittered
with new-fallen snow.
They ran hard to catch it,
but the bear was too fast.
They ran and they ran, climbing
up and up until one of the hunters said
"Brothers, look down."
They did and saw they
were high above the Earth.
That bear was Sky Bear,
running on through the stars.
Look up now
and you will see her,
circling the sky. 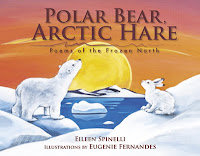 POLAR BEAR, ARCTIC HARE, written by Eileen Spinelli and illustrated by Eugenie Fernandes, is a collection of 24 poems about the flora and fauna of the Arctic. Spinelli teaches readers much about the adaptations that allow organisms to survive there in both the text of the poems and back matter of the book. Readers will learn about the polar bear, narwhal, musk ox, caribou, and more!

THE TRURO BEAR AND OTHER ADVENTURES: POEMS AND ESSAYS, written by Mary Oliver, is a terrific collection of 45 poems (35 classic and 10 new) on wild animals of all kinds, as well as her poorly behaved pooch Percy. There is such joy and reverence in these poems. It's clear Oliver has watched closely and captured the natural world in all its glory. Here's the title poem.

There’s a bear in the Truro woods.
People have seen it - three or four,
or two, or one. I think
of the thickness of the serious woods
around the dark bowls of the Truro ponds;
I think of the blueberry fields, the blackberry tangles,
the cranberry bogs. And the sky
with its new moon, its familiar star-trails,
burns down like a brand-new heaver,
while everywhere I look on the scratchy hillsides
shadows seem to grow shoulders. Surely
a beast might be clever, be lucky, move quietly
through the woods for years, learning to stay away
from roads and houses. Common sense mutters:
it can’t be true, it must be somebody’s
runaway dog. But the seed
has been planted, and when has happiness ever
required much evidence to begin
its leaf-green breathing?

That's it for U. See you tomorrow with some T inspired poetry ponderings.

P.S. - I am working from my iPad while away. Please forgive the wonky formatting and lack of images. I'll fix this when I get back home to my trusty laptop.
Posted by Tricia at 12:01 AM