Poetry A-Z: D is for Dolorous

I have a few poetry books that are hard to read, evoking such heartbreak and sadness. Generally these books tell of tragic events in our history or the unimaginable horrors associated with war. While these topics are difficult, the writers of such books bring readers important perspectives and open our eyes to injustices in this world that cannot and should not be ignored. 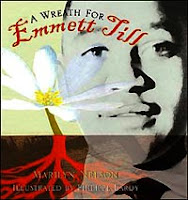 A Wreath for Emmett Till, written by Marilyn Nelson and illustrated by Philippe Lardy, is a heroic crown of sonnets, or a sequence of 15 sonnets that are interlinked like a normal crown of sonnets, except in the heroic crown the last sonnet is made entirely from the first lines of the previous 14 sonnets. One of the things that makes this heroic crown such an achievement is the the last sonnet is also an acrostic poem, in which the first letters of each line spell out the phrase “RIP Emmett L. Till.”

When you have some time, listen to Marilyn Nelson discuss and read excerpts from A Wreath for Emmett Till.
You can also listen to an interview with Marilyn Nelson on NPR and hear her read the poem. If you are interested in using this book in he classroom, you can download a teacher's guide from Houghton Mifflin.

Requiem: Poems of the Terezin Ghetto, written by Paul Janeczko and accompanied by illustrations created by prisoners (and found after the War), is a collection that provides a heartbreaking, shocking, and brutally honest picture of the lives of inmates in the Terezin Ghetto. The walled city of Theresienstadt, Czechoslovakia (Terezin) was a ghetto for Jews transported from Prague and other cities and a way station to the gas chamber. Here's a bit about the camp from the Afterword.


What set Terezin apart from Nazi death camps was the nature of many of its inmates. Terezin became "home" for many of the Jewish intellectuals and artists of Prague. As a result, it became a prison in which the arts were tolerated, then encouraged as a Nazi propaganda tool. Classical music and opera performances were commonplace, despite the horrors and cruelty of captivity.

There is beauty in this collection, even though readers repeatedly experience loss and death. The humanity and strength of the victims, the depravity of the SS, and the horror that was the Holocaust  is evident in Janezcko's carefully chosen words. Reading this is like watching a train wreck—you want to look away, but can't. I wanted to stop reading, but couldn't put it down.

Here's an excerpt from one of the poems.

For nearly sixteen years of Fridays
Willi and I played chess in the park
unless snow drove us
to the back corner of Bloom's.
Only for death—
when my beloved Helen passed,
when his son fell through the ice—
did we miss.
. . .
On a most glorious morning in October
Willi placed the peppermints on the table
but did not sit.
I looked up at the face of sorrow.
He picked up the white king
then laid it softly on its side.
“I can no longer play with you,”
said a false voice.
The sun is blue
would have made as much sense.

You can hear Paul read this poem and one other in the video below.


That's it for D. See you tomorrow for some C inspired poetry ponderings.
Posted by Tricia at 12:01 AM