Poetry A-Z: J is for Jazzy

I grew up in a house where big band, Dixieland, and Frank Sinatra ruled the airwaves. The first concert I attended was headlined by Count Basie and Ella Fitzgerald. we sat so close to the stage (third row), that I felt like they were playing and singing just for me.

I still listen to all kinds of music, and these days I even read about it. By the way, did you know that April is Jazz Appreciation Month?


JAZZY - of, resembling, or in the style of jazz 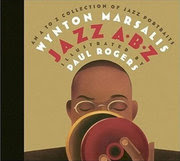 Jazz ABZ: An A to Z Collection of Jazz Portraits with Art Print, written by Wynton Marsalis and illustrated by Paul Rogers, is a collection of 26 verse profiles of jazz greats, with each poem reflecting the musical style of the musician or performer. Brief biographies by Phil Schapp are included for each artist. Here is an excerpt from the first poem. What you need to know about this poem is that the words on the page are spaced in such a way that it forms the triangular outline of the letter A, so you need to see the poem as well as read it aloud. The alliteration works well in this poem and many others.

You can listen to this poem read in its entirety, as well as hear some others at the NPR web site. 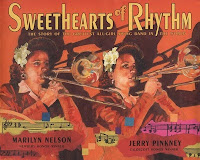 Sweethearts of Rhythm: The Story of the Greatest All-Girl Swing Band in the World, written by Marilyn Nelson and illustrated by Jerry Pinkney, is the story an all-female, racially integrated swing band that toured the United States during World War II. What makes this story unique is that it is told in poems, each in the voice of a band members’ instrument, each titled after a song of the era. It all begins in a pawnshop where a tenor saxophone describes its glory years in an all girl band. Other instruments begin to respond, and soon enough, all of them are sharing stories about days gone by.

With a twilit velvet musky tone
as the pawnshop door is locked,
an ancient tenor saxophone
spins off a riff of talk.
“A thousand thousand gigs ago,
when I was just second-hand,”
it says, “I spent my glory years
on the road with an all-girl band.”
From a shelf in the corner, three trombones
bray in unison: They say
they, too, were played in a gals’ swing band
way back in the day.
Then effortlessly, a blues in C
arises out of a phrase
and the old hocked instruments find the groove
and swing of the Good Old Days.

And now for a musical interlude, courtesy of the Sweethearts of Rhythm. 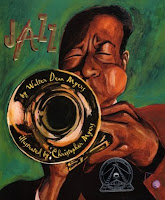 Jazz, written by Walter Dean Myers and illustrated by Christopher Myers, is a collection of poems covering the history of jazz that begins along the Nile and ends on Bourbon Street. In between it covers ragtime to boogie, and every style in between. The poems are accompanied by vibrant paintings that celebrate different styles of jazz.

In addition to the poems, the book opens with a terrific introduction to jazz and includes a selective glossary and chronology.

Becoming Billie Holiday is a fictional verse memoir that tells the story of Holiday's life from birth through age 25. The poems carry titles from Billie’s songbook. The writing is tender and vivid, matter-of-factly portraying the ups and downs that dominated the singer's life. You'll see from the cover image that this book was awarded a Coretta Scott King honor award for writing. Here is one of the poems from this book.

What is a fictional verse memoir? Weatherford explains it this way.


It combines elements of the novel, biography, oral history, persona poem, and one-woman show into a unique genre. The fictional verse memoir is ideally suited to Billie Holiday's sassy, soulful and sophisticated style.

Weatherford has created a web site for the book where you will find a reading guide, book trailer, and other informative links.


That's it for J. I'll see you tomorrow with some I inspired poetry ponderings.
Posted by Tricia at 12:01 AM