I can't believe it's that last day of April. As usual, after 29 days of poetry goodness I have a laundry list of things I wish I'd done differently, topics I wish I'd covered, and books I know I missed. So how does one cap off a month filled with poetry? I've decided to do it with a bit of celebration.

CELEBRATION - the action of marking one's pleasure at an important event or occasion by engaging in enjoyable, typically social, activity 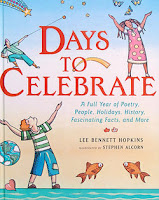 Days to Celebrate: A Full Year of Poetry, People, Holidays, History, Fascinating Facts, and More, written and edited by Lee Bennett Hopkins and illustrated by Stephen Alcorn, is an enormous collection of filled-to-the-brim facts by month accompanied by carefully selected poems. Each month of the year is highlighted with a double-page calendar spread in which each  box on the calendar includes one or more noteworthy events (birthdays, historical happenings, holidays, etc.) for that date. At the top of each double-page spread is a fact box listing the origin of the month's name and information on the flower, birthstone and zodiac sign for the month. Along the bottom readers will find a quote by an individual with a highlighted birthday and a report of some weather extreme that occurred during the month.

Since we're wrapping up April, here are some of the tidbits you'll find for the month of May.

The name for May haas a mixed history. Some say it stems from Maia, the goddess of growth, while others maintain the month was named to pay tribute to the Majores, or Maiores, the older branch of the Roman Senate. The number of days has varied from twenty-two to thirty to today's thirty-one.

Weather Report - On May 17, 1979, the temperature dipped to 12 degrees at the Mauna Kea Observatory, establishing an all-time record low for Hawaii.

For each of the poems in the monthly sections you'll find a bit of informational text about the person, holiday, or event. Here's what you'll find on p. 49.

May 17, 2000:
Sue, a dinosaur, is exhibited in Chicago, Illinois
In South Dakota in 1990 Sue Hendrickson discovered bone fossils that later were assembled into the largest, most complete skeleton ever found of the Tyrannosaurus rex, a dinosaur that lived more than 67 million years ago.
In 1997, at an auction, the Field Museum of Chicago, Illinois, offered the highest price for the bones, more than $8 million.
After three years of laboriously putting Sue back together, she went on exhibit in the Field Museum.

And here's the poem for this event.

No skin,
no scale,
no ancient moan—
her legacy is strictly
BONE.


One of my favorite poems in the book is on p. 104 and is part of the December section.

I Heard a Bird Sing
by Oliver Herford 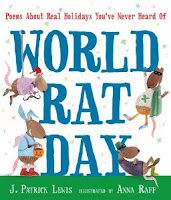 World Rat Day: Poems About Real Holidays You've Never Heard Of, written by J. Patrick Lewis and illustrated by Anna Raff, is a collection of 22 poems about holidays you won't believe actually exist, but they do! There are poems here for Dragon Appreciation Day (January 16), National Hippo Day (February 15), Worm Day (March 15), Firefly Day (April 10), Limerick Day (May 12),—which if I'm not mistaken is Edward Lear's birthday—and many more! While all of the poems and nearly all of these holidays are devoted to animals, I'm find I'm quite partial to the notion of Chocolate-Covered Anything Day (December 16), though the notion of chocolate-covered ants is a bit revolting!. Here are two of my favorite poems.

At every meal, bow your head, fold your wings, and say, “Graze.”
Wait till someone screams, “Let’s heat!”
Don’t talk with people in your mouth.
Never blow on your soup. That only makes it hotter.
Don’t smoke.
Never remove a hare from your food.
Play with your food, but don’t let it run around screaming.
Chew your food. Once.

WHAT THE WORM KNOWS
Take my advice:
For your own good,
Stay away from
The Robin 'hood.

You can learn a bit more about this book and the wonderful illustrations in the video below.


Sadly, this is it for April 2013 and Poetry A-Z. I hope I've fittingly ended this month-long feast of poetry. Now go on into May and continue to celebrate the goodness that is poetry. Thanks so much for joining me.
Posted by Tricia at 12:01 AM