It was Casey Stangel who said “You got to get twenty-seven outs to win.” Since today is the 27th, it seems like the perfect day to talk about two of my favorite things--baseball and poetry. (Okay, I have a LOT of favorite things, but today I'm focused on our national pastime.)

Let's start with a poem.

Analysis of Baseball
by May Swenson

It's about
the ball,
the bat,
and the mitt.
Ball hits
bat, or it
hits mitt.
Bat doesn’t
hit ball, bat
meets it.
Ball bounces
off bat, flies
air, or thuds
ground (dud)
or it
fits mitt. 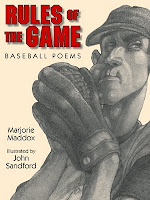 Rules of the Game, written by Marjorie Maddox and illustrated by John Sandford, is a collection that is not only a technical examination of the rules of the game and jargon, but also one filled with an intense love for the game. How can you not love a book with a poem devoted to the infield fly rule? Here's the concluding poem from the book.

Dreams brimming over,
childhood stretched out in legs,
this is the moment replayed on winter days
when frost covers the field,
when age steals away wishes.
Glorious sleep that seeps back there
to the glory of our baseball days.

Let me admit here and now that I'm in love with Kevin Boland (known to his baseball-playing buddies as Shakespeare). How could I not love a boy who loves two of my favorite things--baseball and poetry? How could I not appreciate a boy who writes things like this?


Man, sonnets are hard: counting
syllables in every line, trolling
for rhymes (p.16).


I said I wouldn't write anymore,
but I take that back.


I'm still trying to slip in some inside
rhyme, just a few things that chime
a little but don't go bong, bong, bong
at the end of every line (p. 61).

Shakespeare Bats Cleanup, written by Ron Koertge, is an emotional story told through poems laced with humor, angst, love, loss and of course, baseball. What's a boy to do when he's told he's sick and can't play the sport he loves? His father, who is a writer, hands him a marble composition notebook and and says, "You're gonna have a lot of time on your/hands. Maybe you'll feel like writing/something down."

By the fourth poem in, Kevin has taken a book about poetry from the den and secreted it away to his room.


It feels weird smuggling something about
poetry up to my room like it's the new
Penthouse (p. 5).

As Kevin recovers from mono he writes about the death of his mother, girls, baseball, the past, and the struggles of a typical teenager. The poems take a variety of forms, including sonnet, couplet, free verse, elegy, pastoral, pantoum, and more.

The sequel to Shakespeare Bats Cleanup is the book Shakespeare Makes the Playoffs. Kevin Boland struggles with his new girlfriend (who doesn't really know much about poetry), his new poetry gal pal (who totally gets his poetry obsession), his English class, his father's dating, the line between friendship and something more, and baseball. As with Shakespeare Bats Cleanup, I appreciate Kevin's take on writing, life and baseball. Here are a few of my favorite excerpts.


I love my thesaurus. I like
to think about all the words
in there, cuddling up together
or arguing. Montagues on
one side, Capulets on the other.
Synonyms and antonyms (p. 4).


He calls rhyme a benevolent bully because it'll make a poet
look hard for the right word and then maybe he finds
an even better one (p. 11)!


Sadness is a big dark bus
with a schedule all its own.
But when it pulls up and the door
opens with a hiss, you pretty much
have to get on (p.25).


The sestina is almost impossible. I tried one once
and after a couple of stanzas threw myself onto
the nearest chaise and wept. Copiously (p. 80).


All poems  ©Ron Koertge. Used with permission of Candlewick Press.

Change-Up: Baseball Poems, written by Gene Fehler and illustrated by Donald Wu, is a collection of thirty-six poems in which the narrator describes his baseball-loving life. The collection begins in February with "Snow Baseball" and ends one year later with "Ballfield in February." In between there is anticipation, celebration, and a true reverence for the game. The fact that the narrator is a young boy who shares his love of the game with his family adds to the kid-appeal of this one. Here is one of my favorite poems.

On my shelf my mitt,
stiff from winter's bench-
warming cold,
waits for spring,
for mud-scuffed balls
slapping past, taunting
"Catch me if you can!"
--a challenge
that thaws my mitt
for a chase
through any mud-warmed
ballpark
in suddenly spring.

If you are interested in connecting this book to writing, you can download an activity sheet that encourages kids to write their own book of sports poetry.

Fehler has also written a free verse novel entitled Beanball. Here's an excerpt from the poem that describes the defining event of the novel.

It’s the worst sound I’ve ever heard
in all my years of umping.
Oh, I’ve heard plenty of pitches hit a helmet.
But this . . . this fastball, up and in.
This one hit bone, right in the face.
Not even a scream or grunt from the kid.
He went down like he was shot.

I know him.
I’ve umped and reffed
maybe a dozen of his games.
Not just baseball—
football and basketball, too.
The kid’s a great athlete, a natural.
That’s why it was such a shock to see him go down like that.

The screams come from everywhere:
bleachers, dugouts, infield, mound.
Even from me.


Luke "Wizard" Wallace's story is told by 28 different narrators. They include members of his Oak Grove baseball team, members of the Compton baseball team (the team Oak Grove was playing when Luke was hit), a number of Oak Grove High School students and teachers, members of Luke's family, a doctor and nurse at the hospital, and a number of other characters. There are many voices to keep track of at first, but they intertwine rather seamlessly to tell a most compelling story.


That's it for today. See you tomorrow with another mystery post!
Posted by Tricia at 12:01 AM