Poetry A-Z: H is for Heavenly

I've always been a stargazer and long enamored of the heavens. When I was growing up, the gentleman who lived across the street had a telescope that I would often gaze through. I was allowed to sit outside late into the evening (never on a school night!) and watch the skies. I still love looking up and wondering about all that's out there, much of it probably beyond our imagination. Today's books celebrate a range of things found well above us.

HEAVENLY - of the heavens or sky 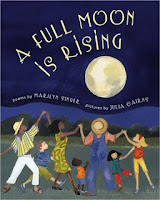 A Full Moon is Rising, written by Marilyn Singer and illustrated by Julia Cairns, is a collection of 17 poems about the full moon. Set in different parts of the world, the poems highlight beliefs and customs related to the full moon. Here's an excerpt.

Lunar Eclipse
A Village in Mali

The back matter of this book includes information about the content of the poems. Readers will learn about tides, Sukkot, the first moon landing, the moon festival, and more. Blast Off! Poems About Space, compiled by Lee Bennett Hopkins and illustrated by Melissa Sweet, is an easy to read anthology containing 20 poems by various poets, including Jane Yolen, Bobbi Katz, J. Patrick Lewis, Ashley Bryan, Lee Bennett Hopkins and others. Since this book is in an easy-reader format, the poems are accessible for young children. Here is one example.


The Moon
by Lillian M. Fisher

The moon has no light
of its own.
It's cold and dark
and dead as stone,
But it catches light
from the burning sun
And shows itself
When each day is done. Comets, Stars, the Moon, and Mars, written and illustrated by Douglas Florian, is a witty, stylish look at the solar system. With illustrations painted in gouache on brown paper bags, readers are treated to a visual feast that includes die-cut, circular peepholes that allow glimpses of heavenly bodies from adjacent pages. The poems are typical Florian, containing made up words, like super-dupiter and Jupiterrific, clever rhymes, and fanciful imagery. Here is an excerpt.

A CRESCENT moon may seem to smile,
Gladly back after a while.

A HALF moon is half-dark, half light.
At sunset look due south to sight.

A FULL moon is a sight to see,
Circular in geometry.

After full, the moon will wane
Night by night, then start again.


The book ends with a galactic glossary that provides a bit of information on each body or topic covered, and also includes a selected bibliography for further reading.


These last two books are out of print, but I adore Myra Cohn Livingston and simply cannot leave these out!

Space Songs, written by Myra Cohn Livingston and illustrated by Leonard Everett Fisher, contains 13 poems that not only discuss the science of the heavens, but also express their vastness and just how astonishing they are. On black pages accompanied by paintings of the poem's topic, the solar system comes to life in word and image. Here is an excerpt.

while powder plastered
on her pockmarked face,
scarred with craters,
filled with waterless seas,

she thinks back
to the Eagle,
to the flight
of men from Earth,
of rocks sent back in space,
and one
faint
footprint
in the Sea of Tranquility.

Sky Songs, written by Myra Cohn Livingston and illustrated by Leonard Everett Fisher, contains 14 poems about a range of objects in the sky, including smog, snow, rain, clouds, shooting stars, and more. Since I've been sharing moon poems, I'm going to continue with that theme.

Why is
the moon always
changing? Sometimes a man
stares down through a window made of
white clouds.

How do
they turn themselves
sideways to watch the stars?
What is it that they see when they look
away?


That's it for H. See you tomorrow with some G inspired poetry ponderings.
Posted by Tricia at 12:01 AM