Poetry A-Z: R is for Reversible

Let's get right to it today with the adjective of the day!


REVERSIBLE - able to be reversed, in particular able to be turned the other way around

Today I'm highlighting a poetic form and two books by Marilyn Singer. The coolest thing about the poems is that whether you are reading them forwards or backwards, they work! (Hence the word reversible and Marilyn's name for the form, Reverso.)


Mirror, Mirror: A Book of Reversible Verse, written by Marilyn Singer and illustrated by Josee Massee, is a collection of poems based on fairy tales that tell two sides of the same story. But wait, there's a catch! The paired poems are inverses of one another, meaning the second poem is created by reading the first poem in reverse (hence reverso).

Here's what Marilyn had to say about this title. 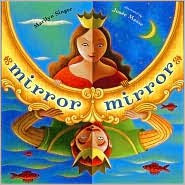 When I was a kid, my parents read me lots of fairy tales and poems, so I have both in my blood. Therefore, it’s no big surprise that I ended about writing an entire book of poems based on these tales, MIRROR, MIRROR. Now, when I was little, I was not a big doll person, but my uncle gave me something called a “Rags-to-Riches doll.” She was dressed in a peasant costume with a patched dress, shawl, kerchief on her head, and no shoes. You took off the shawl and pushed down her skirt (gathered with a drawstring) and, presto, it was a ball gown! Under the kerchief was a crown. Dancing slippers completed the transformation. I’m convinced that that doll influenced this book because for it, I came up with a new poetry form: the reverso.

A reverso is two poems in one. Read the first down and it says one thing. Read it back up, with changes just in punctuation and capitalization, and it's a different poem. To create reversos, I spend many hours at the computer (I write most poems with pen and paper, but not these!) playing with words and lines--shifting them around, seeing what makes sense and what doesn't. But first I start with the fairy tale. I have to be able to find two points-of-view in it that will make a good reverso because the hardest aspect of this form is that when you flip it, the second poem MUST say something different, not just the same message in reverse.Another big influence on this book and these poems is my love of word games, as well as old-fashioned board games such as "Clue" and computer adventure games where you solve puzzles. And I love to challenge myself. Writing MIRROR, MIRROR gave me the chance both to create and solve puzzles. And now I've written a second, as yet untitled, book of fairy tale reversos. Told you--I love a challenge!

The author's note Marilyn provides also gives readers some insight into the form and her process. Here's what she says.


We read most poems down the page. But what if we read them up? That's the question I asked myself when I created the reverso. When you read a reverso down, it is one poem. When you read it up, with changes allowed only in punctuation and capitalization it is a different poem.

The first reverso I wrote was inspired by my cat, August: 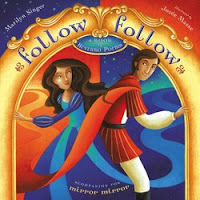 The sequel to MIRROR, MIRROR (or should I say follow up?) is the book FOLLOW FOLLOW: A BOOK OF REVERSO POEMS, written by Marilyn Singer and illustrated by Josee Masse. While I continue to be awed and enamored of the form, I find I also enjoy greatly the twist and change of perspective afforded by reading in another direction. Here's one from the new collection.

These books are a delight to read and will have you coming back again and again.

That's it for R. See you tomorrow with some Q inspired poetry ponderings.
Posted by Tricia at 12:01 AM