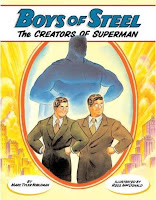 What does it take to bring superhero to life? In Boys of Steel: The Creators of Superman, readers learn that imagination and perseverance both were essential in giving America, and the world, its very first superhero.

Superman debuted in 1938, at a time when the Great Depression had lasted nearly a decade, and the world was teetering on the brink of war. If there was ever a time when people were looking for a fantasy hero, this was it. However, Superman's story began long before that date of publication.

When the book opens we meet Jerry Siegel, a shy kid with glasses who preferred books, and movies to the real world.

But Tarzan, Flash Gordon, and Buck Rogers were fictional characters. They saved other fictional characters in pulp magazines and comic strips. They couldn't save anyone in the real world, where millions of people were struggling to find jobs during the Great Depression of the 1930s. They couldn't save Jerry's father, who died of heart failure during an after-hours robbery in his clothing store in Cleveland.

Not only did Jerry immerse himself in these fantastical worlds, but he also let his imagination wander, writing his own adventure and fiction stories. The retro- comic-style illustrations by MacDonald perfectly fit the subject matter. In the page that describes Jerry's love for writing, he is depicted working at his typewriter, while a group of boys plays ball outside his window. It's clear that Jerry doesn't fit in. He doesn't share the interests of other boys. However, there is one boy who is so like him that they "could've passed for brothers."

Joe Shuster was also a boy who enjoyed the worlds found in comic strips and pulp fiction. Like Jerry he was shy and not athletic. While Jerry created stories with words, Joe created them with pictures. He often spent his time at the kitchen table, drawing his ideas. Like Jerry, he had a difficult home life. When his family couldn't afford art paper, he made due with the back discarded wallpaper or wrapping paper from the butcher shop. In the winter when the family's apartment was cold because it had no heat, he drew "while bundled in several sweaters, one or two coats--even gloves."

Joe often illustrated Jerry's stories. Joe had a plan to to work with Jerry to develop a new character and comic strip, one that they could perhaps sell to a newspaper. Their first attempt centered on a man who fought for truth and justice. When the first publisher said no to the idea, Joe tore up the pages in disappointment.

In 1934, during a fitful night of sleep, Jerry woke to record his ideas for a new hero. A double page spread with a series of story boxes (4 on a page) shows Jerry in his pajamas while the hero in his head begins to take form. The hero would be strong, an alien (though he would look human), capable of leaping so high it would look as though he were flying, full of confidence, and a man with a secret identity. Early in the morning, Jerry ran to Joe's house to share his ideas. He looked over Joe's shoulder as he sketched. Jerry sketched all day, and finally their hero was created on paper. They put an "S" on his costume, for super, but also for Siegel and Shuster.

Joe and Jerry spent more than three years trying to sell their Superman idea. Finally, a man who was publishing a new type of magazine (a comic book), said yes. The Superman comic book was an enormous success. Joe and Jerry's superhero moved from comic books to radio, cartoons, books and movies. He even ended up on television.

The story ends this way.

Some people look up in the sky and see a bird or a plane, but nothing beyond. In the trying days of yesteryear, Jerry and Joe looked up and saw a star that no one had discovered before. They brought him to Earth and watched him become a superstar.

And today, on every story where his name appears, theirs do, too.

While the text itself ends on a happy note, Joe and Jerry's story is not nearly as rosy. Because they believed they might not have another chance to publish their story, they sold it and all the rights to the character for $130.00. Joe and Jerry did not get profits from the continuing sale of Superman stories, though they were employees of the company that is now DC comics and were well paid. When they asked for royalties, they were denied. In 1947, they sued DC for 5 million dollars and the rights to Superman and lost their suit. DC did offer them $100,000 to surrender all claims, which they did. Upon doing so, they were fired.

The author's note is extensive and continues to describe the difficulties that Joe and Jerry faced. In 1975, upon hearing that Warner Bros. Studies has paid DC 3 million dollars for the rights to make a Superman movie, Jerry began a letter-writing campaign. He told the story of how DC ruined their lives and got rich off their creation. There's more to the story, and to this day, negotiations with the families are still ongoing.

This dark part of their story is not told in the illustrated text, but it needn't be. Readers will be inspired enough by the story of how two young men came to create one of the greatest superheroes of all time. Overall, this biography is well-written, perfectly illustrated, and quite engaging. I highly recommend it.
Book: Boys of Steel: The Creators of Superman
Author: Marc Tyler Nobleman
Illustrator: Ross MacDonald
Publisher: Knopf Books for Young Readers
Date Published: 2008
Pages: 40 pages
Grade: 2-6
ISBN: 978-0375838026
Source of Book: Copy received from publisher for Cybils consideration.

This post was written for Nonfiction Monday. Head on over to Anastasia Suen’s blog and check out all the great posts highlighting nonfiction this week.
If you want to use this in the classroom, don't miss the teachers guide. (Hey, I know it looks wrong (it IS wrong), but that's how Random House spells it!)
Other Reviews - Fuse #8
Interviews - Read this fab interview with Nobleman at Guys Lit Wire. (Thanks, Jules!)
Posted by Tricia at 11:12 AM