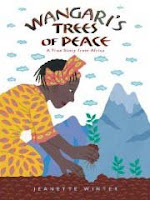 Can one person make a difference in this world? If people believe in what you do and follow your example, can/will change occur? One need only read Wangari's Trees of Peace: A True Story from Africa, written and illustrated by Jeanette Winter, for an unequivocal yes. Wangari Maathai, the 2004 winner of the Nobel Peace Prize, is the subject of this picture book biography. Written in clear, simple text, and accompanied by vibrant acrylic illustrations, readers learn the story of the woman behind the Green Belt Movement.

Imagine living in a world filled with lush green trees, forests filled with birds, and fields ripe with food for harvest. Imagine leaving that world for the opportunities an education would bring. Imagine returning home to find a world that looks completely different. This is what happened to Wangari.

After six years of study in the United States, Wangari returned to her home in the shadow of Mount Kenya to find that the trees were gone. Where women once collected firewood from close to home, these changes in the landscape now meant they had to walk miles away to find it. There were no longer crops to feed the people, and the birds had disappeared.

The trees in Kenya were cut down to make room for buildings, but new trees were never planted in their place.

Wangari thinks about the barren land.
I can begin to replace some of the lost trees
here in my own backyard--one tree at a time.
She starts by planting nine seedlings.

Watching the seedlings take root gives Wangari
the idea to plant more--
to start a farm for baby trees, a nursery.
In an open space, she plants row after row
of the tiny trees.

Wangari recruited women of the village and gave them seedlings to plant. She shared her vision for a better future, one in which the land was green. Wangari and her women kept planting, even in the face of those who mocked them. Wangari paid them for the seedlings that lived past three months. As the green returned to Wangari's village, women in other parts of Kenya began to plant seedlings too.

Despite all these efforts, the cutting continued. When Wangari placed herself between a stand of mature trees and those who would cut it down, she was beaten and taken to prison. However, the movement to plant trees continued, and the green returned to Kenya. Not only did new trees take root, but the land became rich again with crops.

In page after page we see seedlings being planted and how the landscape begins to change. Near the end of the book, an illustration of the earth with Wangari and her trees firmly planted in Africa is accompanied by the text, "The whole world hears of Wangari's trees and of her army of women who planted them." The book ends full of hope and beauty, as we see the view from the top of Mount Kenya, and row upon row of mature trees.

The author's note in the back provides more information about Wangari and the Green Belt Movement she started in 1977. By 2004, more than 30 million trees had been planted and the movement had spread to 30 African countries and beyond.

It is fitting that this book about an environmentalist is printed on 100 percent recycled paper. I found the story inspirational, and young readers will too, as they see how with one simple action, one woman was able to start a movement that changed the landscape of a nation.
Book: Wangari's Trees of Peace: A True Story from Africa
Author/Illustrator: Jeanette Winter
Publisher: Harcourt Children's Books
Date Published: 2008
Pages: 32 pages
Grade: K-4
ISBN: 978-0152065454
Source of Book: Personal copy purchased for Cybils consideration.

This post was written for Nonfiction Monday. Head on over to Anastasia Suen’s blog and check out all the great posts highlighting nonfiction this week.
Posted by Tricia at 11:41 AM