I can't believe it's the last day of April. Where has the month gone? I feel like I have so many more primary sources to share.

Today's poem is written to a photo of my brother and sister with our Semmelmayer cousins. This was taken Christmas day, 1960, five years before I came along. I missed some awfully good times. 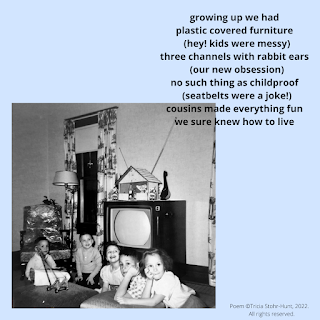 This poem is written as a choka. The choka is a Japanese form of unrhymed alternating five and seven syllable lines that ends with an extra seven syllable line. It can be any odd number of lines. You can learn more about this form at Poets Collective.
Here is a listing of all the poems I've written this month. I've also shared these poems on my Instagram, which is a good place to go to see them altogether.