Today's poem is written to a photo of my grandparents, great grandmother, and great aunt and uncle. The back of the photo is stamped June 17, 1946. 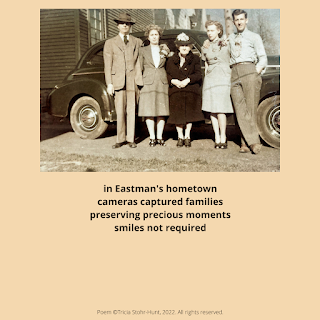 This poem is written as a dodoitsu. I haven't really followed the form too well this time.  While I have followed the pattern (a 4-line poem with a syllable count of 7-7-7-5), I have not focused on "love or work with a comical twist." The post What is a Dodoitsu? contains more information about this Japanese form.
I hope you'll come back tomorrow and see what new inspiration I've found for a poem. Until then, you may want to read previous poems in this series. I'm also sharing these poems on my Instagram in case you want to see them all in one place.

In addition to today's National Poetry Month poem, I'm also in with the poetry sisters challenge to write in the style of Taylor Mali. You can find my poem here.

I do hope you'll take some time to check out all the wonderful poetic things being shared and collected today by Jone MacCulloch. Happy poetry Friday friends.