Today's poem is written to the receipt for my mother's engagement ring. I was surprised to see that the store where my father bought the ring sold jewelry AND appliances. I have to believe that $145 was a big investment for my dad at the time. The Dollar Times calculator shows that when adjusted for inflation, $145 in 1951 is equivalent to $1,617 today. That sounded like a lot to me until I read a recent survey that found the average engagement ring cost in the United States is $5,900. Yikes! I paid less for a 2010 Mini-Cooper with 77,000 miles in 2019.

In any case, I found a lot to ponder when I saw this receipt. It certainly wasn't burning a hole in my dad's pocket, as he proposed the next day. Here's the poem I wrote. 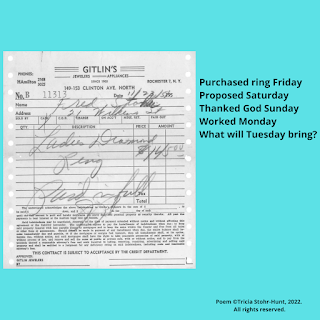 This poem is written as a Gogyohka. Gogyohka simply means verse which is written in five lines. This is a non-syllabic form, with each line generally representing one phrase. Invented in the 1960s, the idea was to "take the traditional form of Tanka poetry (which is written in five lines) and liberate its structure, creating a freer form of verse." You can learn more about this form at Writer's Digest Gogyohka: Poetic Form.