Today's poem is written to an envelope with buttons inside. That is my mother's handwriting on the outside. She would have been 20 when her grandmother died. I have no way of knowing if she made this note at the time of her grandmother's death or some time later. This small remembrance of my mother's grandmother got me thinking about my grandmothers, both of whom are described in this poem. 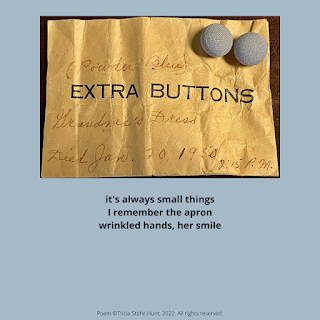 This poem is written as a senryu. Senryu is a three line poem written in the 5-7-5 form like haiku. While haiku focus on nature, senryu focus on human foibles. You can read more about senryu at How to Write Senryu Poems: Understanding the Senryu Form.
I hope you'll come back tomorrow and see what new inspiration I've found for a poem. Until then, you may want to read previous poems in this series. I'm also sharing these poems on my Instagram in case you want to see them all in one place.