Today's poem is written to a piece of V-mail my Great Uncle Ray (the youngest of 8 kids) sent to my grandmother (the second oldest). In it he says:

I just got a letter from Babe telling me about the celebration that the gang is planning for Ma & Pa's "Golden Wedding Anniversary" ... to be held on the 29th of November. I might as well let you know right now, that I'm sore as hell at the whole bunch of you for not letting me know about it sooner. Consider yourself bawled out.

Even in a time of war, the kid brother was still giving his big sister a hard time. This doesn't surprise me about my uncle at all. 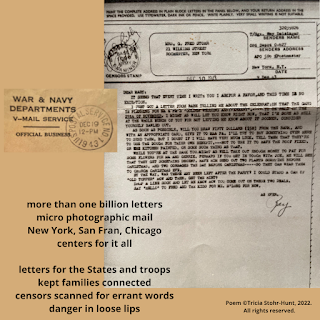 This poem is written as a pair of dodoitsu. I haven't really followed the form too well this time.  While I have followed the pattern (a 4-line poem with a syllable count of 7-7-7-5), I have not focused on "love or work with a comical twist." The post What is a Dodoitsu? contains more information about this Japanese form.

Victory Mail, more commonly known as V-mail, was used to expedite mail service for American armed forces overseas. Using microfilmed messages reduced the bulk and weight of letters. This meant there was more space on planes for other war supplies and that letters could reach troops faster than before. In the years it was in operation (June 1942-November 1945), more than 1 billion letters were processed. You can learn more about it at Mail Call: V-mail.

Finally, I do hope you'll take some time to check out all the wonderful poetic things being shared and collected today by Janice at Salt City Verse. Happy poetry Friday friends.