Today's poem is written to a letter my father received from his cousin while he was serving in the war. I imagine it was hard on the young people left behind, particularly as they worried for family and friends and wondered if they would make it home. 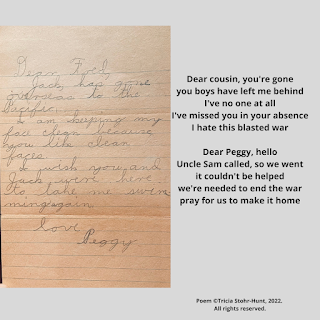 This poem is written as a somonka. The somonka is a Japanese form that consists of two tanka written in tandem. Tanka is a form of Japanese poetry that has been practiced for more than 1000 years. Tanka are composed of 31 syllables in a 5/7/5/7/7 format. Most tanka focus on nature, seasons, the discussion of strong emotions, or a single event of some significance. In a somonka, the first tanka is usually a declaration of love, with the second a response to that declaration. You can learn more about the somonka at Poetry Magnum Opus.