Today's poem is written to a list my grandfather wrote on the back of a receipt and slipped in an old calendar. It lists the cars he bought throughout his life by make and color. I really wish he had included information on the model, because I'd love to know more about that Studebaker. 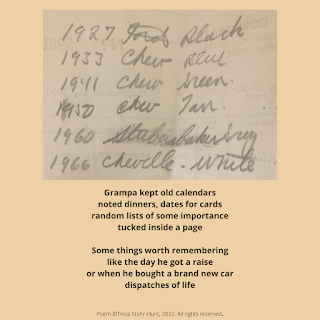 This poem is written as a pair of dodoitsu. I haven't really followed the form too well this time.  While I have (loosely) followed the pattern (a 4-line poem with a syllable count of 7-7-7-5), I have not focused on "love or work with a comical twist." The post What is a Dodoitsu? contains more information about this Japanese form.