Today's poem is written to my grandfather's christening photo. I'm struck by the length of the gown, the setting of the portrait, and the serious look on his face. This photo immediately made me think of my mother, who could shoot a look that made you know you were in big trouble. She didn't even need to speak. One look and you just knew. That's where this poem went. 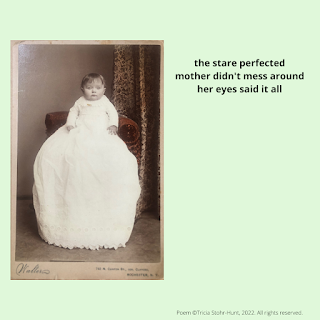 This poem is written as a senryu. Senryu is a three line poem written in the 5-7-5 form like haiku. While haiku focus on nature, senryu focus on human foibles. You can read more about senryu at How to Write Senryu Poems: Understanding the Senryu Form.