Today I'm sharing the thoughts of J. Patrick Lewis, former Children's Poet Laureate and author of more than 50 books of poetry. The book he curated, National Geographic Book of Nature Poetry: More than 200 Poems With Photographs That Float, Zoom, and Bloom!, will be released in October. You can read more about him at the Poetry Foundation. 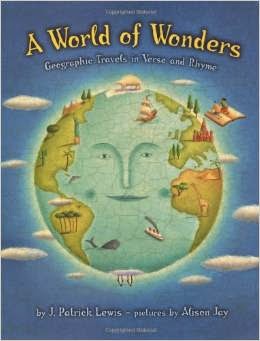 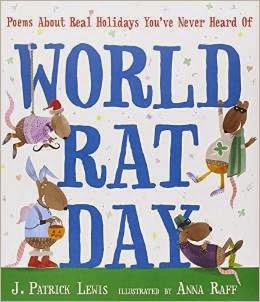 How does a poem begin for you — with an idea, a form, an image, or something else?
Pat: None of the above. A poem for me almost always emerges from a word, one word. “In the beginning was . . .” and so forth. And sooner or later, voila! another word appears. My latest collection began with the word “blue.” I decided to write a series of ekphrastic poems to classical paintings, all of which have a predominance of the color blue in them. If the ms. ever sees the light of
day, that will be its title—BLUE.

How do you choose the form of your poems?
Pat: In poetry, as in architecture, form follows function. In short, it depends on what one intends to write about. Limericks, obviously, are wholly inappropriate for the more serious themes, like civil rights, national monuments, or outstanding women. Likewise, you are unlikely to find sonnets as texts for the very young. I do have a fondness for villanelles, not in spite of but because they are so damnably hard to do well. Elizabeth Bishop took fifteen years to write “One Art,” and it shows. Why write if the challenge isn’t there?

Are there any forms you haven't tried but would like to? Why or why not?
Pat: I’m endlessly working my way through Robin Skelton’s indispensable The Shapes of Our Singing: A Comprehensive Guide to Verse Forms and Metres from Around the World. For any poet eager to experiment, there is a surprise on every page.

What tools (rhyming dictionary, book of forms, etc.) do you use in writing poetry (if any)?
Pat: What tools doesn’t one use? Another necessary title that is bolted to my desk is Lewis Turco’s The Book of Forms (revised and expanded edition). Writing poetry without it is like crocheting without needles. I continually turn to Stephen Fry’s The Ode Less Traveled for its wisdom, humor, and suggested exercises. Rhyming dictionaries, yes, of course. The Random House Unabridged is on my dictionary stand, and within arm’s reach is Mr. Roget, silent partner in all my endeavors.

I shamelessly admit that I steal forms (as T.S. Eliot advised) from many a volume sharing space on my bookshelf by some now nearly forgotten poets— Samuel Hoffenstein, Harry Graham, the Carryls, père and fils, W.S. Gilbert, Arthur Guiterman, Ms. Anonymous, and of course, the unforgettable Lear and Carroll.


What would you like students or children to know about poetry?
Pat: I would like them to know that, at the age of seven, they should pay no attention to grownups who call them “poets.” They are not poets but practitioners. A seven-year-old who climbs up on a piano stool and bangs on the keys is not a pianist.

Second, and again to paraphrase Eliot, rhyming is not one of your holiday games. If children decide that rhyming is what they want to do, let them begin doing it—at the age of 30 or so. For now, just encourage them to write.

Finally, one of your esteemed colleagues suggested I ask for a poem in a foreign verse form. Would you be willing to share a poem for this project?
Pat: The is a Deibide Baise Fri Toin, an Irish verse form. The rhyme scheme is AABB; the syllable count, 3/7/7/1

Night’s begun.
When I can see just that one
unimaginable star
far

out in space
winking at the human race,
I feel positively sky-
high.

A million thanks to Pat for participating in my Jumping Into Form project this month.
Posted by Tricia at 12:01 AM