Tanka is a form of Japanese poetry that has been practiced for more than 1000 years. Tanka is generally defined as a poem composed of 31 syllables in a 5-7-5-7-7 format. Most tanka focus on a single event of some significance.

In her article Tanka as Diary, Amelia Fielden writes:

Tanka, meaning ‘short song’, is a 1300 year old Japanese form of lyric poetry. Non-rhyming, it is composed in Japanese in five phrases of 5/7/5/7/7 syllables.

In English, tanka are normally written in five lines, also without (contrived) rhyme, but in a flexible short/long/short/long/long rhythm. Due to dissimilarities between the two languages, it is preferable not to apply the thirty-one syllable standard of the Japanese poems, to tanka in English. Around twenty-one plus/minus syllables in English produces an approximate equivalent of the essentially fragmentary tanka form, and its lightness. To achieve a “perfect twenty-one”, one could write five lines in 3/5/3/5/5 syllables. If the resulting tanka sounds natural, then that’s fine. However, the syllable counting does not need to be so rigid. Though no line should be longer than seven syllables, and one should try to maintain the short/long/short/long/long rhythm, variations such as 2/4/3/5/5 or 4/6/3/6/7 or 3/6/4/5/6 syllable patterns can all make good tanka.

This spring there are two new poetry books that highlight this form. 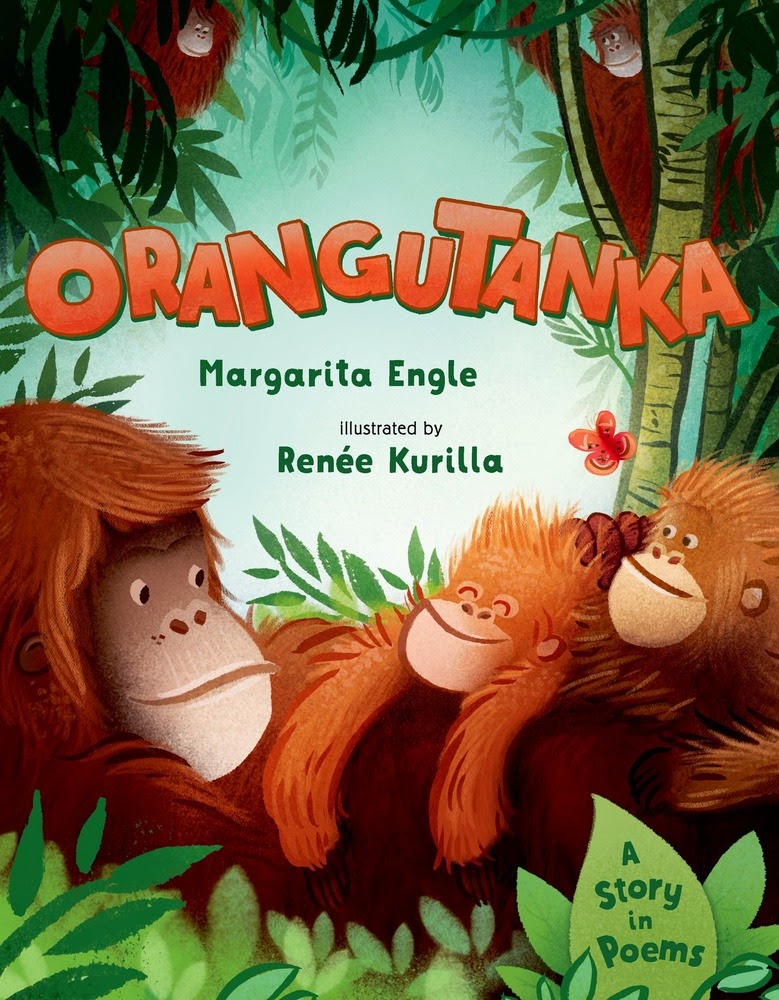 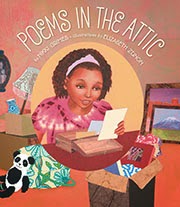 Orangutanka: A Story in Poems (2015), written by Margarita Engle and illustrated by Renee Kurilla, is a collection of tanka that tell the story of a family of orangutans living in a wildlife refuge. Back matter includes orangutan facts and recommended resources to learn more about orangutans. The book opens with a note about tanka poems. Here is an excerpt.

Tanka is an ancient Japanese form consisting of five lines, with a traditional syllable count of 5, 7, 5, 7, 7. Modern tanka poets rarely count syllables, but do follow the basic line pattern of short, long, short, long, long. The poems in this book take the modern approach and mostly have a loose line length rather than adhering to strict syllable counts.

The tanka form is often used as a poetic travel diary. Unlike haiku, tanka poems can include simile, metaphor, opinions, emotions, and, occasionally, a bit of rhyme.

Tanka poems are traditionally untitled, with minimal punctuation and capitalization.

Check out this book trailer to see examples of the vibrant art that accompanies the informative and lyrical poems.


Poems in the Attic (2015), written by Nicki Grimes and illustrated by Elizabeth Zunon, is a collection of paired free verse and tanka. The book opens with a seven-year old girl visiting her grandmother. During the visit she discovers poems in the attic—poems written by her mother. What follows on each two-page spread are a pair of poems, a free verse poem (on the left) written by the girl, and a tanka (on the right) written by the girl's mother when she was a child. The mother's poems capture a childhood on the move as the daughter of an Air Force captain.

Memories can be like sandcastles
the waves wash away.
My mama glued her memories with words
so they would last forever.

Home on leave, Daddy
took me to the Grunion Run!
Our flashlights found them—
slim fish, silver as new dimes,
wiggling ashore to lay eggs.

Back matter includes an explanatory note on poetic forms, as well as information on the specific bases mentioned in the poems.

Here are some resources you may find helpful in exploring and writing tanka in the classroom.
I hope you've enjoyed this brief introduction to the tanka. On Saturday and Sunday 'll be sharing interviews with children's poets. On Monday I'll return with a week-long look at haiku in varied forms, covering a wide range of topics.
Posted by Tricia at 12:01 AM