Renga is an ancient Japanese form of collaborative poetry. The Renga platform in the UK provides this introduction for beginners.

A renga is a series of short verses linked into one long poem, composed collaboratively by a group. Each constituent verse must make sense independently. It should also connect in some way with the verses that follow and precede. The verses alternate between 3-lines and 2-lines throughout.

The opening verse of a renga is called the hokku. It takes the same form as haiku - three short lines. A renga opens with some reference to the season of composition and moves - not necessarily in orderly sequence - through all four seasons, generally ending with a spring verse. Seasonal themes are generally sustained for at least a couple of verses, and the passage from one season to the next is often broken by one or more non-seasonal verses.

Seasonal reference is made through the use of a season-word, which may be obvious, like ‘autumn rain’ or ‘snow’, or more subtle, for instance, ‘watermelon’ for summer. Season words include cultural as well as natural references; for instance, you might use April Fool's Day for spring. The two key principles of renga are link and shift. Link means that each verse should connect in some way with its immediate predecessor. Shift means that, with the exception of the link just noted, each verse should move on, drawing on imagery, which is new (for that particular renga). That is, repetition is to be avoided. Even when linking, although there will be some implicit connection, actual words and phrases should not be repeated. 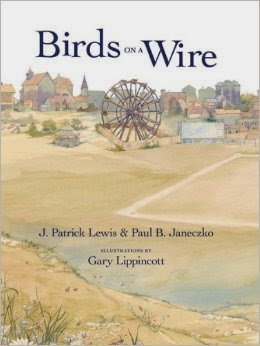 Birds On A Wire: A Renga 'Round Town (2008, OP), written by J. Patrick Lewis & Paul Janeczko and illustrated by Gary Lippincott, is a series of interlinked verses that describe life in a small town on a single day. Instead of the usual renga pattern with authors alternating each verse, the poets here have chosen to alternate PAIRS of verses. They do acknowledge this break from tradition in the introduction, explaining that "We each wrote five lines and broke them into three-line and two-line stanzas.'

The introduction to this book actually provides quite a bit of information about the form. Here's an excerpt.


What, you might be wondering, is a renga? Like a haiku, a renga is an ancient Japanese verse from in which poets take turns adding verses. The word is both singular and plural, like sheep or salmon. A renga (meaning "linked verse") isn't nearly as well known as a haiku, and that's too bad because haiku really evolved from renga.

A traditional renga is written by two or more poets. The first poet writes three lines (similar to haiku), the second poet follows that with two lines, the first poet comes back with another three lines, then two, three, two, and son on. Like railroad cards in a line, each verse links in some way with the one preceding it, but not with the others. That means that each new verse can send you off in a completely different direction. And the next poet must discover how to connect to the new verse.

The book opens at the beginning of a day with these verses.

in the blizzard
of apple blossoms,
a road edged in white

As readers are taken on a trip through the town they encounter a creek, grasshopper, florist, doughnuts, hardware store, old Ferris wheel, ballpark, and much more. By day's end and the end of the journey, readers have had a lovely glimpse into small town life.

My favorite verse from the book hearkens to a poem of William Carlos William's that I love.

glazed with rain
a red wheelbarrow headstands
by the hardware store

If you wish to try writing renga in the classroom, you need to settle on some rules that will work for you and your kids. I particularly like those set out at My Need to Write in a post entitled How To Write Poetry: Renga.

You may also find some helpful resources at these sites.

Finally, here is a renga project you should be aware of. Even though it isn't meant for the elementary classroom, it will give you a feel for the the beauty and challenge of writing a renga.

In 2011, a group of 54 poets contributed 10 lines each to one poem about America. Called Crossing State Lines: An American Renga, this amazing collaboration includes the likes of Robert Pinsky, Rita Dove, Philip Levine, Edward Hirsch, Billy Collins, and more. This project was commissioned by America: Now and Here, an organization founded by Eric Fischl to promote conversation about contemporary America through the arts. This 45 minute film is a reading of the resulting renga.

NPR also did a story on this project. You can hear Carol Muske-Dukes, one of the book's editors and a poet, along with two additional poets talk about the project in the piece 'Crossing State Lines': 54 Writers, One American Poem.

It's hard to pick a favorite here, but I'm quite drawn to these lines by Edward Hirsch.

Every state is a state of mind

Every love is a drive
toward a move perfect union


I hope you've enjoyed this brief introduction to the renga. I'll be back tomorrow with another Asian poetic form.
Posted by Tricia at 12:01 AM