Do you recognize the lines above? They come from Sonnets from the Portuguese (this is 43) by Elizabeth Barrett Browning.

The sonnet is a fourteen-line lyric poem that originated in Italy and slowly made its way across Europe and to England. Sonnets were first written as love poems. The type of sonnet, Petrarchan (Italian) or Shakespearean (English) generally determines the structure and rhyme scheme. Before we get into the "rules" and specifics, let's start with a some words about the sonnet.

In That Book of Dad's
I Borrowed

chapter two was about the sonnet.
Man, those made me want to go back to
haiku. Like a burger with everything on it,
sonnets are packed with roses and dew,
summer days, tender breaths, rocks and rills
(whatever rills are), and tons of wimpy guys
who apparently thought it was a thrill
to sit around with some sheep and sigh
about everything. I'm not that lame.
I'm just a former baseball whiz who'd like
to do what I used to do. Again.
Even if it means getting called out on strikes.
Sorry, Will, the sonnet's not for me.
Baseball's my love—not some thou or thee.

to write that, and it isn't very good.
I finished, though, because I might be
skinny and sick but I'm not a quitter.

Man, sonnets are hard: counting
syllables in every line, trolling
for rhymes.

But it's really cool how everything fits
into fourteen little lines.

It's kind of like packing a lunch box,
getting in way more good stuff
than I thought I could.

These two poems are from Shakespeare Bats Cleanup by Ron Koertge. Kevin Boland (known to his baseball-playing buddies as Shakespeare) is sidelined by mono and must spend time at home resting and recuperating. What's a boy to do when he's told he's sick and can't play the sport he loves? His father, who is a writer, hands him a marble composition notebook and says, "You're gonna have a lot of time on your/hands. Maybe you'll feel like writing/something down." Soon after this Kevin takes a book about poetry from the den and secrets it away to his room.


It feels weird smuggling something about
poetry up to my room like it's the new
Penthouse.

As Kevin recovers from mono he writes about the death of his mother, girls, baseball, the past, and the struggles of a typical teenager. The poems take a variety of forms, including sonnet, couplet, free verse, elegy, pastoral, pantoum, and more. One of the things I love about this book is Kevin's perspective on writing and poetic forms, particularly the sonnet. 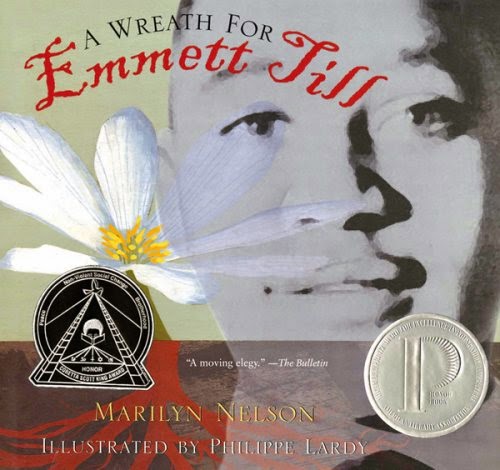 A Wreath for Emmett Till (2005), written by Marilyn Nelson and illustrated by Philippe Lardy, is a heroic crown of sonnets, or a sequence of 15 sonnets that are interlinked like a normal crown of sonnets, except in the heroic crown the last sonnet is made entirely from the first lines of the previous 14 sonnets. One of the things that makes this heroic crown such an achievement is the the last sonnet is also an acrostic poem, in which the first letters of each line spell out the phrase “RIP Emmett L. Till.”

You can listen to an interview with Marilyn Nelson on NPR and hear her read the entire poem. If you are interested in using this book in he classroom, you can download a teacher's guide from Houghton Mifflin.

The Emily Sonnets: The Life of Emily Dickinson (2012), written by Jane Yolen and illustrated by Gary Kelley, is a sequence of sonnets that together tell the story of Dickinson's life. Written in the voices of Dickinson, her dog, sister, and others, each poem lovingly points back to the words used in Dickinson's own works. Back matter includes detailed information about the context of the poems and includes interesting and endearing anecdotes to accompany each sonnet.

Here are Yolen's words from the Author's note about the collection.
In this book of sonnets about Emily's life, I have given each poem a title and an indication as to the speaker, whether Emily herself, her sister Lavinia (Vinnie), her niece Martha (Mattie), her mentor/friend Thomas Wenworth Higginson, an unknown critic, or me (JY). I have tried to tell the truth of her life, but as Emily said: "Tell all the Truth but tell it slant—/Success in Circuit lies ..."

No house in town was built of brick
Except the one that bore me.
The roof was slant, the walls quite thick.
My mother did not adore me.
My father's smiles were rare and swift,
A grimace more than joy.
I was the second child, a gift;
The first one was a boy.

We two, like sailors in a storm,
Clung desperate to each other,
Trying to stay safe and warm,
Small sister to big brother;
He strove so hard my life to save
From drowning in that icy wave.


It's rare to find sonnets in poetry for children, so I have one more title to recommend. 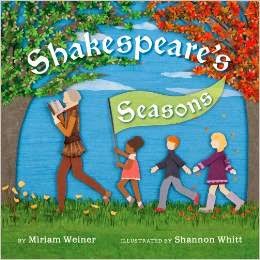 Shakespeare's Seasons (2012), created by Miriam Weiner and illustrated by Shannon Whitt, is an introduction to Shakespeare that combines snippets of his verse (mostly sonnets) accompanied by illustrations that span the seasons of the year. Back matter includes a short note about Shakespeare and his work. Here is an excerpt.


The way people speak to each other has changed a bit since Shakespeare's time. This is why some of the words in this book—words from his sonnets and plays—may sound funny to you. But listen carefully and you can enjoy the music of his words, and the pictures they create in your mind.

The book opens with the season of summer and these lines.

Shall I compare thee to a summer's day?
Thou art more lovely and more temperate:
Rough winds do shake the darling buds of May,
And summer's lease hath all too short a date.
Sonnet 18, 1-4

Most excerpts shared are four lines or less, though the longest quote is eight lines. Shakespeare's words, paired with Whitt's lovely images, make the language and ideas easily accessible for children. If you haven't seen this title, take a quick look at the images from the book at Shannon Whitt's web site.

If you are ready to tackle reading and/or writing the sonnet with your students, here are some helpful resources.
That's it for the sonnet. I'll be back tomorrow with another form.
Posted by Tricia at 12:01 AM