Today I'm sharing the thoughts of Margarita Engle, a Cuban-American poet, novelist, and journalist. She is the author of a number of children's books and young adult verse novels, including The Surrender Tree: Poems of Cuba's Struggle for Freedom, which received the first Newbery Honor ever awarded to a Latino. Margarita's most recent books, all 2015 releases, include Orangutanka: A Story in Poems, Drum Dream Girl: How One Girl's Courage Changed Music, The Sky Painter: Louis Fuertes, Bird Artist, and Enchanted Air: Two Cultures, Two Wings: A Memoir. 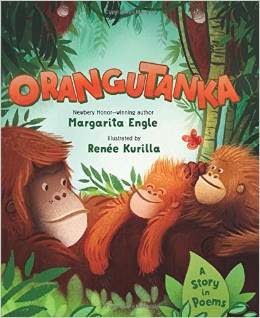 How do you begin a poem?
Margarita: This is a really great question, because the writing process is different for each poet. I’m a morning person, and a nature lover, so I begin each poem early, still halfway lost in a dreamlike state of mind.  I begin with peace and quiet.  So many of my poems are parts of historical verse novels that re-entering the flow of emotions from previous poems is essential.  I have to feel whatever my characters feel.  It’s a bit like combining time travel with shape shifting.

How do you choose the form of your poems?
Margarita: I experiment!  I often end up returning to free verse, sometimes with a bit of rhyme, as in Drum Dream Girl, but I also write prose poems, haiku, tanka, and occasionally a metered form.  One of my new picture books, Orangutanka, is written entirely in tanka. After trying different forms, it’s easy to see which one works for a particular story or theme.

Are there any forms you haven't tried but would like to? Why or why not?
Margarita: I would love to try more rhymed, metered forms.  In particular, I am eager to try a collection of related poems in a picture book format.

What would you like students or children to know about poetry?
Margarita: I hope they realize that any emotion they experience can find a home in a poem.  It’s a safe place to pour sadness, joy, hope, and rage.  Poetry can give them the freedom to express themselves honestly.

Finally, one of your esteemed colleagues suggested I ask for a poem in a foreign verse form. Would you be willing to share a poem for this project?
Margarita: Yes, the following is a legend from my Taíno ancestors, re-told in the Cuban décima form. The décima is a rhymed, metered poem that most commonly has ten eight-syllable lines in a rhyme pattern abba aa abba.  In this poem I’ve used twelve lines with a rhyme pattern abab  cdcd  efef. Changing a décima is perfectly acceptable!  When they’re used as the lyrics of rumba songs, they are often improvised.

In a time when people were stars
in deep, hidden caves of the sea,
a fisherman ventured so far
that a hole in the cave set him free.

He burst from the cave up to sky
and reached the bold shimmer of light.
No longer a man who could cry,
he was silent until darkest night.

Then the song that flew from his heart
was the sweetest song ever heard,
a melody about the start
of life as a winged, singing bird!

A million thanks to Margarita for participating in my Jumping Into Form project this month.
Posted by Tricia at 12:01 AM