A list poem is a carefully crafted list, catalog, or inventory of things. Robert Lee Brewer of Poetic Asides writes this in his article List Poem: A Surprisingly American Poem:

The list poem was used by the Greeks and in many books of the Bible. But two of the most popular American poems, Walt Whitman’s “Song of Myself” and Allen Ginsberg’s “Howl,” are list poems. So what is a list poem?

Basically, a list poem (also known as a catalog poem) is a poem that lists things, whether names, places, actions, thoughts, images, etc. It’s a very flexible and fun form to work with.

Whitman is one of my favorite list poem writers. Here's one that particularly stands out for me.

I hear America singing, the varied carols I hear,
Those of mechanics, each one singing his as it should be blithe and strong,
The carpenter singing his as he measures his plank or beam,
The mason singing his as he makes ready for work, or leaves off work,
The boatman singing what belongs to him in his boat, the deckhand singing on the steamboat deck,
The shoemaker singing as he sits on his bench, the hatter singing as he stands,
The wood-cutter’s song, the ploughboy’s on his way in the morning, or at noon intermission or at sundown,
The delicious singing of the mother, or of the young wife at work, or of the girl sewing or washing,
Each singing what belongs to him or her and to none else,
The day what belongs to the day—at night the party of young fellows, robust, friendly,
Singing with open mouths their strong melodious songs.

What is it about list poems that makes them so accessible? Perhaps it's because the list is so ubiquitous in our lives. Everyone makes lists, so finding them in poetry is not unexpected and makes them seem familiar.

In the book Conversations With a Poet: Inviting Poetry into K-12 Classrooms (2005), written by Betsy Franco, the chapter devoted to the list poem includes this background and helpful information.

The list poem or catalog poem consists of a list or inventory of things. Poets started writing list poems thousands of years ago. They appear in lists of family lineage in the Bible and in the lists of heroes in the Trojan War in Homer's Iliad.

List poems abound in poetry collections and are sometimes found in narrative prose. Here's an example from the book Kartography (2004), written by Kamila Shamsie. 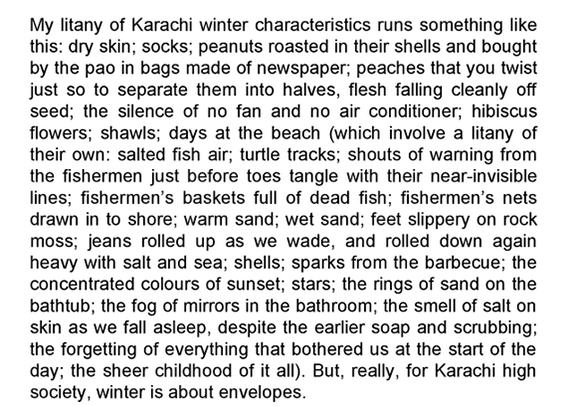 This litany of Karachi winter characteristics could easily be turned into a list poem, though I read it as a prose poem as written.

Falling Down the Page: A Book of List Poems (2009), edited by Georgia Heard, is a wonderful collection of list poems. It begins with this excerpt from the Introduction.

Out for a walk in New York City I see: yellow cabs speeding down Broadway; people lounging in overstuffed chairs at a coffee shop. I hear: cars honking; a dog barking in the distance. As I walk along I make a list in my head of what I observe just like Walt Whitman did over one hundred years ago in his famous list poems Song of Myself. The list or catalog poem is one of the oldest and most accessible of poetic forms.

... Poets meticulously craft their words to create list poems. Falling Down the Page highlights the wide variety of the list poem form, from a simple list of words with a twist at the beginning or end to more complicated and detailed descriptive lists.

Here are two poems from this collection.

Are We There Yet?
by Heidi Roemer

Road maps,
Train maps
Show us where we are.
Builder's maps,
Landscape maps,
Maps drawn in the sand.

Fold-up maps,
Rolled-up maps.
A globe held in my hand.

Tattered maps,
Treasure maps-
What secrets are they holding?

I like maps.
I read maps.
They get me where I'm going.

Recipe For Writing An Autumn Poem
by Georgia Heard

This is a wonderful book, full of surprises. It opens vertically and is visually very interesting. (It was designed by John Grandits, so this should come as no surprise to anyone who's seen his concrete poetry books!) This is not only a great choice for read aloud, but also a terrific mentor text for students learning to write list poems.


I want to close with this list poem by George Ella Lyon.

Where I'm From
By George Ella Lyon

I am from clothespins,
from Clorox and carbon-tetrachloride.
I am from the dirt under the back porch.
(Black, glistening,
it tasted like beets.)
I am from the forsythia bush
the Dutch elm
whose long-gone limbs I remember
as if they were my own.

You can also hear it read on George Ella Lyon's web site or listen to it in the video below.
There are a number of resources available for teachers wanting to use this poem as a model for list poem writing.

Now that your brain is filled with list poem goodness, here are some resources to help you begin writing list poems with kids.

I hope you have found this introduction to list poems helpful. I'll see you back here tomorrow for another form.
Posted by Tricia at 12:01 AM