Poems of apology ... well, we must begin with the poem that started it all.


This Is Just To Say
by William Carlos Williams

I have eaten
the plums
that were in
the icebox

and which
you were probably
saving
for breakfast

Forgive me
they were delicious
so sweet
and so cold

There are some who call this "the dreaded plum poem." I happen to like "This is Just to Say". Was the speaker truly remorseful? It's hard to say. Would I have forgiven the writer? Eventually, but I would have been really aggravated to find and read that note. I can just imagine it today, scribbled on a Post-It note stuck to the refrigerator.

The books that follow contain poems in the style of Williams, and are written as apologies. 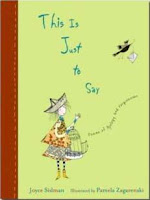 This Is Just to Say: Poems of Apology and Forgiveness (2007), written by Joyce Sidman and illustrated by Pamela Zagarenski, is written in the voices of school children and is organized in this fashion.
This book is a direct result of Sidman's work as a writer-in-residence at schools, where she uses the poem as a model. There is a wealth of material here, with seventeen apology and seventeen response poems. Here's a sample pair of poems.

The Black Spot
(written by Alyssa for her sister Carrie)

That black spot on your palm.
It never goes away.
So long ago
I can hardly remember,
I stabbed you with a pencil.
Part of the lead, there,
still inside you.
And inside me, too,
something small and black.
Hidden away.
I don't know what to call it,
the nugget of darkness,
that made me stab you.
It never goes away.

Roses Are Red
(written by Carrie in response to Alyssa)

Roses are red,
violets are blue.
I’m still really
pissed off at you.


The topics and emotions related in these poems are those that any child today might deal with. There are apologies for making fun of the dress a teacher is wearing, breaking a mother's precious glass deer, not winning a spelling bee, hitting a friend too hard with a dodge ball, and more. Some of the poems reveal the writer to be truly remorseful, while others are only slightly apologetic.

To learn more you should check out the particularly useful reader's guide at Sidman's web site. You may also want to take a moment to watch and listen to her read from the book.


Forgive me.
This next book
is anything
but remorseful.

Since it borrows
Williams' form,
I had to include it.

Please read on
and chastise me
later. 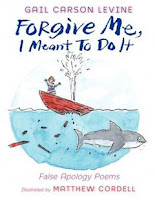 Forgive Me, I Meant To Do It: False Apology Poems, written by Gail Carson Levine and illustrated by Matthew Cordell, is a collection of poems connected with nursery rhyme or fairy tale themes and characters that borrow Williams' form but include apologies that are conditional or utterly insincere. Some of these poems are dark, but they're all entertaining and some are downright funny. Here's one of my favorites.

This Is Just to Say

I have shortened
my nose
with your saw

because
honestly
telling lies
is so much fun

Forgive me
I don't care
about becoming
a real boy

You can download an excerpt from the Harper Collins site. Better yet, head over to Matthew Cordell's blog for a view of the art and some of the poems.

If you are interested in writing poems of apology with your students, check out some of these resources.
That's it for poems of apology. Join me this weekend for interviews with Joyce Sidman and Joan Bransfield Graham.