Today I'm sharing the thoughts of Marilyn Singer, author of more than 80 books in a range of genres, including non-fiction, fairy tales, picture books, mysteries, poetry, and more. Recent poetry titles include Rutherford B., Who Was He?: Poems About Our Presidents (2013), Follow Follow: A Book of Reversos (2013), A Strange Place to Call Home (2012), The Superheroes Employment Agency (2012),  A Stick is an Excellent Thing: Poems Celebrating Outdoor Play (2012),  A Full Moon Is Rising (2011), Mirror Mirror: A Book of Reversible Poems (2010), and First Food Fight This Fall and Other School Poems (2008). 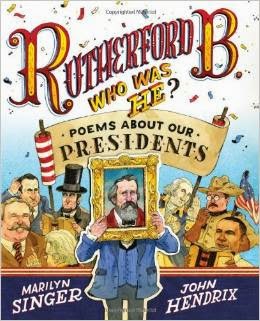 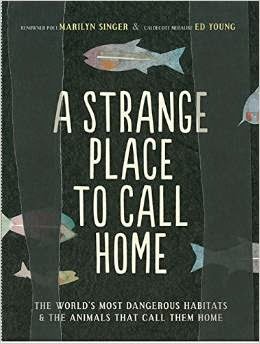 How does a poem begin for you — with an idea, a form, an image, or something else?
Marilyn: For me, a poem can begin with any of those things.  Sometimes, it’s an image.  I saw the full moon between skyscrapers near Times Square, NYC, where the Broadway theatres are, and it led to the image of the moon as an actor waiting in the wings to make an entrance.  That in turn led to the poem “Broadway Moon” in A Full Moon Is Rising (Lee & Low).  Other times, it’s an idea that sparks a poem.   I was thinking about the nature of fire and these lines came into my head:  “Fire has contradiction/at its heart/from that wintry blue part/to its jagged golden crown.”   They became the opening of the poem “Contradiction” from Central Heating (Knopf).  For my reverso poems, the process of writing obviously begins with form. A reverso is a poem in two parts.  The second part reverses the lines from the first part, with changes only in punctuation and capitalization, and it has to say something different from the first part. Mirrror Mirror and Follow Follow, both published by Dial, are my books of reversos based on fairy tales, and I have a third book of reversos, Echo Echo, based on Greek myths, coming out next spring. When I decide to create a reverso, I have to find a narrative that will fit that form. I look for two sides to a story, and then I find lines that can be flipped, which requires a lot of participles, questions/declarations, etc.  I usually write poems by hand on paper, but I have to write the reversos on a computer in order to shift around lines more easily and see what makes sense.

How do you choose the form of your poems?
Marilyn: Other than the reversos, which are a deliberate choice, I’m not really sure how I choose the form of my poems.  I don’t think that there’s one thing at work which determines my choice. Sometimes a line begs to be repeated, for example, “A stick is an excellent thing,” from the title poem from A Stick Is an Excellent Thing (Clarion).  That call for repetition suggested that I use the line in a triolet, one of my favorite forms.  But often, my choice is more like: I’m going to write about spadefoot toads for my book about animals in dangerous habitats, A Strange Place to Call Home (Chronicle), and I’ve researched them, and, they’re in the desert, which is dry and sparse, and the poem’s about nature, and  how about a haiku: “They can deal solo/with dryness, but give them rain,/and then: toads explode.”

Are there any forms you haven't tried but would like to? Why or why not?
Marilyn: There are lots of forms I’ve seen on lists and don’t know anything about. Tetractys? Tyburn? Dorsimbra? Maybe I’ll get to some of them—and maybe I won’t. I tried my hand at some villanelles and enjoyed them, though they were quite difficult. I’ve never written a sestina, and I don’t know if I ever will.  It seems a bit daunting. In general, I’m drawn to forms that are more concise—triolets, cinquains, haikus, as well as free verse—forms that say a lot in a little.  But, who knows, maybe I’ll wake up some morning with the burning need to write epic verse (though probably not!).

What tools (rhyming dictionary, book of forms, etc.) do you use in writing poetry (if any)?
Marilyn: I use all of the above—a rhyming dictionary (mostly online), a thesaurus, and reference sites to forms—as well as spell check.  ;-)

What would you like students or children to know about poetry?
Marilyn: When I was very young, my parents read poetry to me.  It made me fall in love with words and what they can convey.  It also made me believe that there is not just one view of the world. Poetry is about surprise—seeing a cat, a stone, a trip to the ocean, an annoying neighbor, racial politics, climate change, bird migration, something conceptual or concrete in a unique way.  And the poet’s efforts to do that allow the reader or listener to share that view, and perhaps use his or her own mind and senses to look at things differently.

Also, poetry can be a fun game. Writing my reversos, in particular, has been the ultimate word game. And I think, for readers, figuring out what the poems say and how they say it (and then maybe trying to write reversos themselves) is also a good game.

Finally, one of your esteemed colleagues suggested I ask for a poem in a foreign verse form. Would you be willing to share a poem for this project?
Marilyn: Here’s the title poem from Follow Follow.  It’s based on the Pied Piper tale.  Who is speaking in each part of the poem?

Hundreds of rats,
my dear citizens of Hamelin,
shall never return!
All the children
once again play merrily in the streets.
On this festive day
I will
tell the council to relay what I say:
“Many thanks
for your
trouble.
There will be
no pay.
It is time, Piper, to go away.”


It is time, Piper, to go away?
No pay?
There will be
trouble
for your
"many thanks."
Tell the council to relay what I say:
I will,
on this festive day,
once again play merrily in the streets.
All the children
shall never return.
My dear citizens of Hamelin—
hundreds of rats.

A million thanks to Marilyn for participating in my Jumping Into Form project this month.
Posted by Tricia at 12:01 AM