Today I'm sharing the thoughts of Avis Harley, a former teacher and author of 5 books of poetry for children, including African Acrostics: A Word in Edgewise (2009), The Monarch’s Progress: Poems with Wings (2008), Sea Stars: Saltwater Poems (2006), Leap into Poetry: More ABCs of Poetry (2001), and Fly with Poetry: An ABC of Poetry (2000). 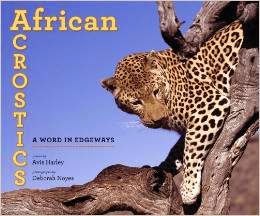 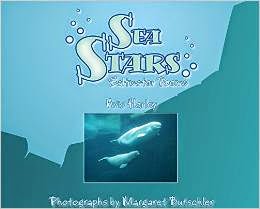 How do you begin a poem?
Avis: It varies.  It can be a visual image, a musical thought, a physical sensation, or perhaps just a single word.  But before I start writing, I like to immerse myself in someone else’s poetry. Sometimes an idea might come from this reading, but mostly I return to my earlier inspiration.  A word grows into a phrase that grows into a line, and slowly, over time and many, many rewrites, a poem might emerge.

How do you choose the form of your poems?
Avis:
It’s crafty business, poetry writing,
But poetic forms are so inviting!

A myriad of forms from which to choose,
but the content decides which one to use.

What tools do you use in writing poetry?
Avis: I enjoy playing with rhyme, and have three different rhyming dictionaries. My Penguin Rhyming Dictionary is a well-thumbed paperback.  Another book is A Rhyming Dictionary and Poets’ Handbook by Burges Johnson, where the words are grouped into one-syllable rhymes, two-syllable rhymes, three-syllable rhymes, and so on – a double-dactyl-delight.  I also like Walker’s Rhyming Dictionary.  It is a reverse-order dictionary and a handy source for eye-rhymes, where endings are the same in spelling but not in sound.  I love eye-rhymes, and wrote a whole book of them, but recognize this obscurity is hard to sell.  But they were fun to write, and here’s one of them:

Dandelions plough
straight through
cement.   Although
just a golden hiccough
shining in its tiny trough,
for Dandelion, that is enough.

I also use the thesaurus, plus a Webster’s and an Oxford dictionary.  Canadians sometimes have different pronunciations and spellings to the Americans for certain words.  The ‘u’ in words such as honour, savour, humour, etc., disappears when my poems go over the border, bringing back childhood memories of a big red X on a spelling test if the ‘u’ were ever omitted.

But most of the time we both agree,
except when saying ‘zed’ or ‘zee.’

For forms, I often refer to The Harper Handbook to Literature, edited by Northrop Frye, et al.  Lewis Turco’s The Book of Forms: A Handbook of Poetics is a wonderful resource.  A book I encouraged my teacher/librarian students to read when I was teaching a poetry course at the University of B.C. is called The Teachers and Writers Handbook of Poetic Forms, edited by Ron Padgett.  It’s full of useful information and reader-friendly definitions.   I am somewhat addicted to collecting books of form, if only to discover new and obscure kinds of poems I’d like to try.


What would you like students or children to know about poetry?
Avis: It doesn’t always have to rhyme or be funny. Poetry is the most inspiring and beautiful arrangement of words language can offer. Poetry is a producer of the ‘ah-ha’ moment. Robert Frost said “Poetry begins in delight and ends in wisdom.” I would like children and students to discover this delight and wisdom by reading lots and lots of good poems – all kinds. Poetry is meant to be enjoyed; too many ‘simile-safaris’ can kill poetry. I would like them to know the wonder of language, and to try writing their own poems, and learn through this experience that poetry writing is not easy, but so rewarding.  It is a lifelong friend.


Are there any forms you haven't tried but would like to? Why or why not?
Avis: Yes, there are a lot of forms I have not yet tried!  I have experimented with many different ones in two ABC poetry books I’ve written, and do have my favourites – especially haiku, triolet, sonnet, limerick, and acrostic.  I’ve always been intrigued with puzzles and word games: crosswords, scrabble, anagrams, acrostics, words-within-words, rebuses, and any type of word fun that could be a springboard for a poetic form.  I like to create poems with messages inside, and enjoy inventing my own forms.

Finally, one of your esteemed colleagues suggested I ask for a poem in a foreign verse form. Would you be willing to share a poem for this project?
Avis: "Foreign" can mean unfamiliar, and my choice of verse form will be unfamiliar, as it is an original poetic form I have created.  I’ve called it the intravista, where words within words, arranged downward, make a poem within a poem.  Here is an intravista about our old cat, Sockeye:

A thermal cushion arrives on my lap,
spurred on by the thought
of a blissful nap.  She neatly
washes paws and chin – then lets
her heartwarming purr begin.
So pleasant that murmur of purr and meow,
there’s enough contentment
to unfurrow my brow.

Her
purr
is
as
warm
as
her
fur.

By hiding a word within another word, the intravista continually surprises me.  Coming up with an unusual word to envelop another one always seems to spark an unexpected idea, and it’s fun to have an inner voice give you two poems for the price of one.  As April is the month of blossoms, and also Poetry Month, I’d like to close with this poem:

IN THE KEY OF BEE

Blossom weather!
The sun-dappled
street is alive
with humming.  Listen
to these trees blissfully thrumming
in the soft key
of honeybees!

The
apple
tree
is
full
of
bee!

A million thanks to Avis for participating in my Jumping Into Form project this month.
Posted by Tricia at 12:01 AM