An ekphrastic poem is a vivid description of a scene or, more commonly, a work of art.

Poets.org defines ekphrasis in this way.

"ekphrasis"—a vivid description of a thing. Ekphrasis during the Greek period included descriptions of such battle implements, as well as fine clothing, household items of superior craftsmanship (urns, cups, baskets), and exceptionally splendid buildings.
. . .
ekphrastic poems are now understood to focus only on works of art—usually paintings, photographs, or statues. And modern ekphrastic poems have generally shrugged off antiquity's obsession with elaborate description, and instead have tried to interpret, inhabit, confront, and speak to their subjects.

Here is how the Maier Museum of Art at Randolph College describes ekphrastic poetry.

The creation of original poetry and prose in response to works of visual art, known as Ekphrastic writing, is a writing exercise originating in ancient Greece where schoolboys were assigned composition exercises about painting and architecture. Familiar examples are poems such as John Keats’ “Ode on a Grecian Urn” (1819) or W. H. Auden’s “Musée des Beaux Arts” (1938). 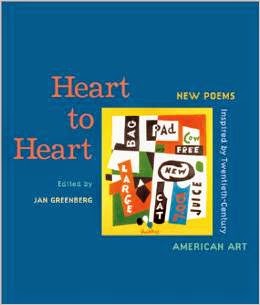 Heart to Heart: New Poems Inspired by Twentieth Century American Art (2001), edited by Jan Greenberg, is a collection of poems inspired by and written to selected works of art by Alexander Calder, Jackson Pollack, Grandma Moses, Jacob Lawrence, Andy Warhol, Roy Lichtenstein, Georgia O'Keeffe and others. Pieces include paintings, photographs, sculptures and more. An illustration from Faith Ringgold’s Tar Beach is even included. This book was a 2002 Printz honor book.

In the Introduction Greenberg writes:


In college I discovered there was a long tradition of poets writing on art, going back to ancient Greece. I read Homer's description of Achille's shield and John Keats' Ode on a Grecian Urn. The list grew. Now in my books on American art, I find that including poetry enriches the text, adds an element of surprise. For what the poet sees in art and puts into words can transform an image, "giving us a sense," says the poet Bobbi Katz, "of entering a magical place," and extending what is often an immediate response into something more lasting and reflective.

These connections between reader and viewer, writer and artist, resulted in this anthology, celebrating the power of art to inspire language.

... Whether the word are playful, challenging, tender, mocking, humorous, sad, or sensual, each work of art, seen through the eyes of a poet, helps us look at the world around us with fresh insight.

The book is divided into several sections, labeled Stories, Voices, Impressions, and Expressions. Some of the poems in the book tell stories, while others speak from the artwork itself as the voice of the object or a person depicted within. Some describe the elements of the artwork, while others still explore the nature of art and the artist.

In the section on Expressions is a pantoum by Bobbi Katz. It was written for an untitled Rothko work created in 1960. Here is how it begins.


Lessons from a Painting by Rothko
How would you paint a poem?
Prepare the canvas carefully
With tiers of misty rectangles
Stacked secrets waiting to be told.

In the section on Impressions is a poem by Jane Yolen. Here is an excerpt. Can you guess which well-known painting it accompanies? (The title has been excluded for obvious reasons!)


Do not dwell on the fork,
the brooch at the throat,
the gothic angel wing
of window pointing toward
a well-tended heaven.

See how well you did by looking for the answer here.

The ekphrastic poems in this book are moving and lovely. In addition to those mentioned above, you'll find pieces by Kristine O'Connell George, X. J. Kennedy, J. Patrick Lewis, Naomi Shihab Nye, Carole Boston Weatherford, Janet Wong, Ron Koertge, and many others. Back matter includes biographical notes on both the poets and artists. 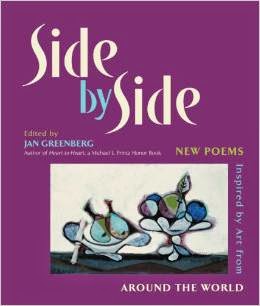 Side By Side: New Poems Inspired By Art From Around the World (2008), edited by Jan Greenberg, is a collection of poems inspired by and written to selected works of art from around the world. Most of the poems in this work were written or translated specifically for this collection. The artwork represents a mix of "ancient, traditional, modern, and contemporary art." Like her first work, Greenberg has divided this book into the sections Stories, Voices, Impressions, and Expressions. They are described this way.

In the Introduction, Greenberg says this about ekphrastic poetry.


And ekphrastic poetry has fascinated poets for centuries. The poet takes the time to sit and stare at an artwork, to think about what he or she sees and to write it down. It forces the viewer not only into more than taking in the image but also into finding words to express what he or she feels. Art may challenge our minds, but it also touches our souls. 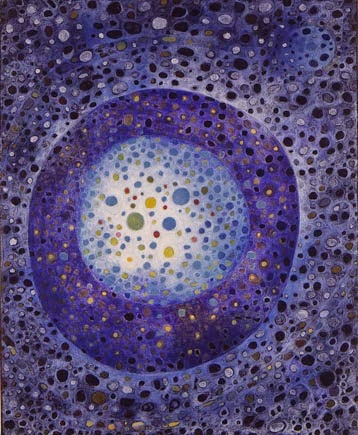 Dawn by Ei-Kyu
Image from the National Museum of Modern Art, Tokyo

I love this volume because it introduced me to many works of art and writers I have never seen or read before. The back matter includes biographies of the poets, translators, and artists. 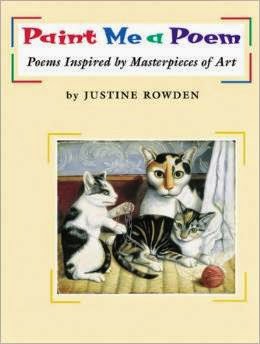 Paint Me a Poem: Poems Inspired by Masterpieces of Art (2005), written by Justine Rowden, is a collection of 13 poems inspired by paintings on display in the National Gallery in Washington. It is written for young children, so the poems here often capture a child's imaginings in relation to the art. You can view examples of the art and poems at the author's site.


J. Patrick Lewis was kind enough to send me some poems he is working on for a collection of ekphrastic poems. Here are two examples.

Surprised by Moon, but at his ease,
The imperturbable lion sees
A water jar, a mandolin,
The wooden woman in her skin.

He does not put on brute display
His fascination for the prey
That other nights on other dunes
Ruthlessly reddens other moons.

He must be fed but must be full;
No doubt his appetite is dull
From ravaging the wicked part
Of his corrupted lionheart.

Whatever reasons there may be
For this pastoral scenery,
Midnight capitulates to dawn.
The lion lingers, and moves on. 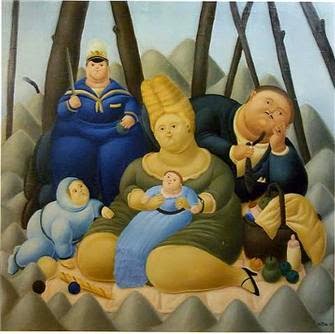 Is it a picnic? Is it a lark?
Mother and Father swelling the park
with baby blue babies,
baby fat babies,
one bound for outer space,
one on the Ark.
Adolescently wavy,
the Admiral lookout’s
becoming a navy
all to himself,
while Father’s daydreaming
of roast beef rare,
or else the apostrophe
of Mother’s hair.

Finally, I want to point you in the direction of Irene Latham's Poem-a-Day Project for National Poetry Month 2015. Entitled ARTSPEAK!, Irene is writing a series of ekphrastic poems for a a wide range of images found in the online collections of the National Gallery of Art. Her project focuses on "dialogue, conversations, what does the piece say?"

If you are ready to begin writing ekphrastic poems with your students, here are some helpful resources.

I hope you've enjoyed this brief introduction to ekphrastic poetry.
Posted by Tricia at 12:01 AM