Mask or persona poems are poems in which the subject of the poem is the speaker.  In creating the poem the writer takes on a "mask" or personality and speaks in the voice of an animal, element of nature, or inanimate object.

In the book Conversations With a Poet: Inviting Poetry into K-12 Classrooms (2005), written by Betsy Franco, the chapter devoted to the persona poem includes this background.

In a form or mode of poetry called the persona poem or "mask poem," the poet takes on the voice of someone else--puts on a mask. In these poems, the poet takes over the persona of someone other than himself or herself and speaks in the first person. In the 1800s Robert Browning and Alfred Lord Tennyson wrote persona poems, among other forms. These poets and their contemporaries usually took on the voice of a historical or mythological character. This is also done in modern persona poems, but nowadays, poets also speak as if they were such things as an object, a place, an animal, an abstract idea, or a fantasy character.

In her book Dogs & Dragons, Trees & Dreams: A Collection of Poems (1980), Karla Kuskin shares a number of mask poems. The preface to this section of the collection reads:

The following five poems do not have titles. As you read each poem you will figure out what it is describing. Each one tells how it would feel to be something other than yourself.

I've read a lot of definitions and descriptions of mask poems. I think I like this one best for kids. Here's one of the poems she shared.


There are many, many good books of poetry written entirely as mask poems. Mask poems can also be found in numerous children's poetry collections. Here are just a few of my favorites. 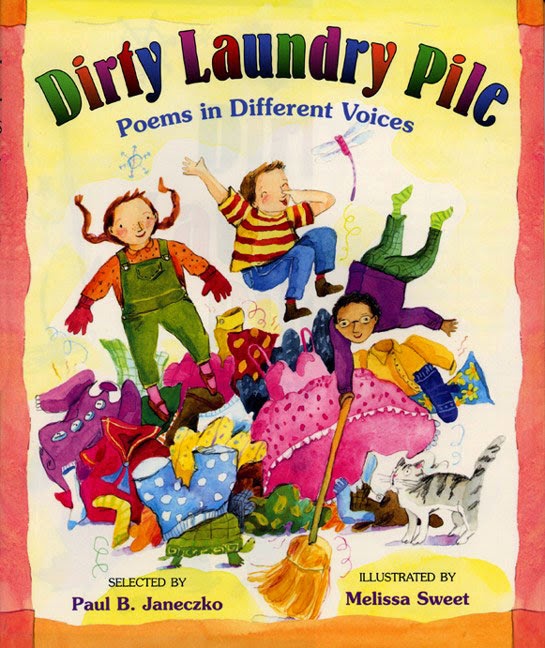 Dirty Laundry Pile: Poems in Different Voices (2001), selected by Paul Janeczko and illustrated by Melissa Sweet, is a collection of poems in the voices of a broom, kites, gloves, crayons, and more. In the introduction Paul writes:


I collected the poems in this book because I love reading poems written in the voice of an object or an animal, as if that thing or creature were speaking to me. In these persona or mask poems, as they are called, the poets let their imaginations fly and feel what it might be like to be a mosquito, a crayon, a kite, a turtle. It's something like wearing a Halloween costume or playing a part in a school play. Great fun, don't you think? As you read these poems, if you find yourself wondering what it would feel like to be a caterpillar, a soccer ball, or a honeybee, grab a pencil and let your imagination fly in a poem. Let that new voice sing!

In this book you'll find poems like "The Vacuum Cleaner's Revenge," "Scarecrow's Dream," and "Prayer of a Snowflake." This book is a terrific mentor text for using with kids learning to write mask poems. Here is an example.

Come, press my mouth against your ear,
I hold a message just for you.
Deep inside my throat is where
It curls, waiting for you to hear.

Put there by the sea itself,
Who whispered something you should know
In shadowy sounds wound round my shell,
And with my hidden tongue, I'll tell. 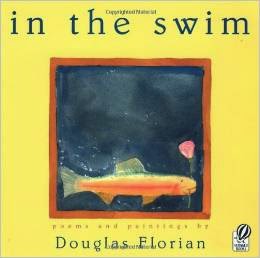 in the swim (2001), poems and paintings by Douglas Florian, is a collection of humorous poems about underwater creatures. Many of the poems in this volume are written in the voice of the animal. Here's one of my favorites.

The Starfish
by Douglas Florian

Although it seems
That I'm all arms,
Some other organs
Give me charm.
I have a mouth
With which to feed.
A tiny stomach
Is all I need.
And though it's true
I have no brain,
I'm still a star—
I can't complain. 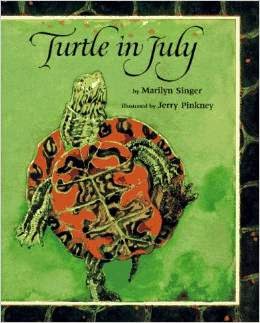 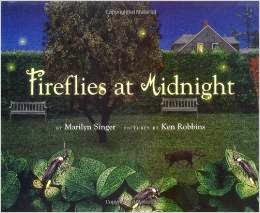 Two titles by Marilyn Singer, Turtle in July (1989, OP), illustrated by Jerry Pinkney, and Fireflies at Midnight (2003), illustrated by Ken Robbins, are both collections of mask poems. Turtle in July is a collection of poems that pairs animals with the months of the year. It also includes four seasonal poems focused on the bullhead (a type of catfish). Fireflies at Midnight is a collection of poems about animals at different hours of the day on a summer day. 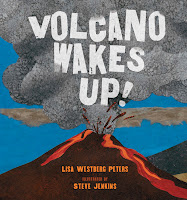 Volcano! Wakes Up, written by Lisa Westberg Peters and illustrated by Steve Jenkins, is a collection of mask poems that describe a day in the life of an imaginary Hawaiian volcano. Ferns, lava flow crickets, a small black road, and the volcano itself all speak in these poems. Here's how it opens.

I'm the baby.
I'm much smaller than my
big sister volcanoes. I'm a little sleepy
now, but when I wake up, watch out! I throw
nasty tantrums. It always works--I get the most attention!


Here's what the ferns have to say when they realize the volcano is awake.

Fire-maker's awake!
She's about to
make
this caldera
a lake of fire and
lava. Ah, the
party
must be over.
Put away all the
streamers.
Say
good-bye,
honeycreepers.
But wait . . . it's
not
hot yet. It's
not even warm
yet. What a
lucky
delay on this
beautiful day. Hey,
everybody, let's
party!

Button Up!: Wrinkled Rhymes, written by Alice Schertle and illustrated by Petra Mathers, is a collection of 15 mask poems in which the author speaks in the voices of shoes, galoshes, undies, a bicycle helmet, and more. Here's an excerpt.

Good old Bertie,
he lets us hang around.
It doesn't bother Bertie
when we drag along the ground.
We're not up tight
as our Bertie Buddy knows.
We're hang loose laces and
we don't do bows!

Now that you've seen some great examples, here are some helpful resources for reading and writing mask poems with your students.

That's it for the mask/persona poem. I hope you'll join me back here tomorrow for another form.
Posted by Tricia at 12:01 AM