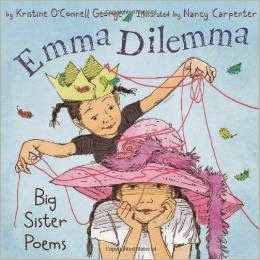 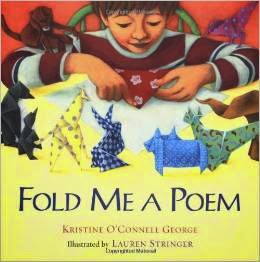 How does a poem begin for you — with an idea, a form, an image, or something else?
Kristine: All of the above. Poems—and fledgling ideas—flit into my mental inbox in many different ways. Although it’s sometimes difficult to pinpoint why or how a particular idea will snag my attention, it’s most often because I have a personal connection with the topic. Perhaps it’s something I’ve seen, heard, experienced, or even dreamed.

Many of my poems (and rhymed picture books) were sparked by observation: The crows hassling a young hawk in our cedrus deodora tree; wind rustling aspen leaves; a puppy curling up in a splash of sunlight. Book! (Clarion Books) was the result of spending time with a toddler who was beyond delighted when she suddenly realized she could ‘operate’ the pages of a board book all by herself. The poems in Little Dog and Duncan (Clarion Books) were based on my observations of two rascally dogs while serving as hostess of doggie sleepovers.

While working on this interview, I decided to see to take a walk to see how many ‘poem ideas’ I could discover. Here’s a photo of one of them: 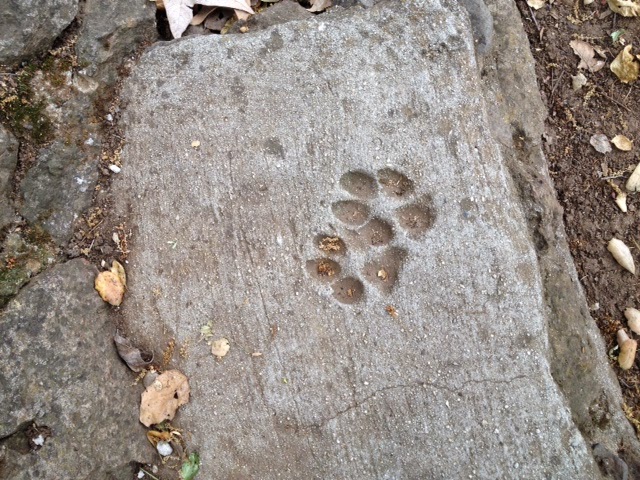 What’s interesting to me are not only the paw prints of a long-gone dog in old, cracked concrete, but also the position of the prints. I imagine a child—seeing that tempting swatch of wet cement—held the dog’s two front feet in one hand and pressed down firmly.

Sound also inspires poems: “Owl” in Old Elm Speaks: Tree Poems (Clarion Books) was the result of hearing an owl calling late at night from our native oak tree. At 2 a.m.—with the lines of the poem were still circling in my head—I got up and wrote a draft. Sound also inspired “River Messages” and “Chipmunk” from Toasting Marshmallows: Camping Poems. In both cases I tried to choose language that echoed the sound of a mountain river and a chipmunk’s chatter.

Dreams, and those muzzly moments of half-consciousness when one is drifting off to sleep or just waking up, are another wellspring of ideas and images for poems. A dream about flying in a windstorm—using a jacket as a sail—resulted in my first published poem, ‘Skating in the Wind.’ [Here is a young boy reading the poem at Homemade Mama.] (While I often hope to discover good ideas in the notebook I keep by my bedside along with my handy-dandy flashlight pen, I rarely can decipher my scrawl.)

How do you choose the form of your poems?
Kristine: If I’m lucky, the poem will give me hints. Perhaps it’s tidy and polite and best tucked into cozy couplets. Maybe it’s a ‘free-range’ poem that longs to stretch its free verse legs into boundless white space. (Most of the poems in Emma Dilemma: Big Sister Poems (Clarion Books) and Swimming Upstream: Middle School Poems (Clarion Books) are primarily free verse. In both cases, I ‘heard’ my narrator’s voices in my head as conversational.)

Sometimes I deliberately choose a ‘non-form’ that hints at a more formal structure. An example of this would be Little Dog Poems and Little Dog and Duncan (Clarion Books). Because the ideas for the poems captured discrete moments in the lives of two dogs, they could easily have been haikus. However, after much deliberation, I chose to create ‘looser’ poems (someone described them as haiku-ish) in the hopes that they might serve as easily-mastered templates for very young writers. (Based on the bushels of ‘Little Pet’ poems I have had the pleasure of reading, I think it worked out.)

Last, when I encounter a stubborn poem, I will rewrite (endlessly) in as many forms as possible until a form shouts:  Me! Pick me! During school visits, I often share all (All!) of the revisions I wrote for ‘Polliwogs’ from The Great Frog Race (Clarion Books). Students are astonished (and horrified) as I have them count the number of revisions. Forty seven!

What surprising things have you learned by accepting the challenge of fitting meaning into a structured form? What are the benefits of accepting these disciplined restrictions?
Kristine: In our poetry writing classes, Myra Cohn Livingston often had us rewrite poems in a variety of forms (and voices). This invaluable training forced me to think deeply about my topic and not merely skim the surface. As a result, I often write poems in strict metered and rhymed forms and then ‘deconstruct’ as I play with ideas, layout, and readability. What often remains is the sense of a form and, rather than rigid rhymed lines, there are internal/slant rhymes.

Sometimes, while writing in a structured, rhymed form, I discover that while it’s fun to read aloud, I’ve added so much padding that it distracts from and dilutes the main idea. Increasingly, I lean toward ‘less is more’ and often distill or condense longer poems into short, tight poems such as haikus. The four haiku about a flashlight in Toasting Marshmallows: Camping Poems (Clarion Books) are an example of my ‘get on and off the page quickly’ approach


What tools (rhyming dictionary, book of forms, etc.) do you use in writing poetry (if any)?
Kristine: All! I have yards of how-to poetry books of all flavors. While I do read and study these books, I don’t often refer to them when I am working on a poem. I may, however, dip into a rhyming dictionary if I am really, really stuck.

What would you like students or children to know about poetry?
Kristine: I keep thinking about Kate DiCamillo’s reply to a young reading asking why there are words in a book: "Words are a special way for me to tell you a story and I don’t have to be there. It’s like magic.” [A Conversation with Kate DiCamillo facilitated by Lisa Von Drasek of the Kerlan Collection can be viewed on YouTube.]

I think poetry is magic as well. It is nearly unimaginable to me how words—mere marks on paper—have this surprising power to make an intimate connection with a reader across centuries, continents, or cultures. I hope—at least once in a lifetime—that every student might experience that elusive, breath-catching moment when they realize that another human feels as they do. One of my favorite memories is of a 4th grader curled up in the corner of the library reading one of Myra Cohn Livingston’s collections. I’ve forgotten which collection it was, but not what the student told me as she hugged the book: “This lady is just like me.” I have also not forgotten what a very shy 3rd grader whispered to me after an assembly: “I feel like you wrote your poems just for me.” These experiences that connect us are what I’d like students to know about poetry. I’d also like students to know that—through poetry—they can send their own unique voices out in to the world.

Finally, one of your esteemed colleagues suggested I ask for a poem in a foreign verse form. Would you be willing to share a poem for this project?
Joan: Happily! Will you be naming said esteemed colleague? ;)
When asked to contribute a poem for Jan Greenberg’s Heart to Heart: New Poems Inspired by Twentieth Century American Art, I chose a pantoum to try to capture the repetition and sense of an echo in Kiki Smith’s ‘These Eyes.’ Here is the poem along with some interesting responses from students at PoetryRed5-7. 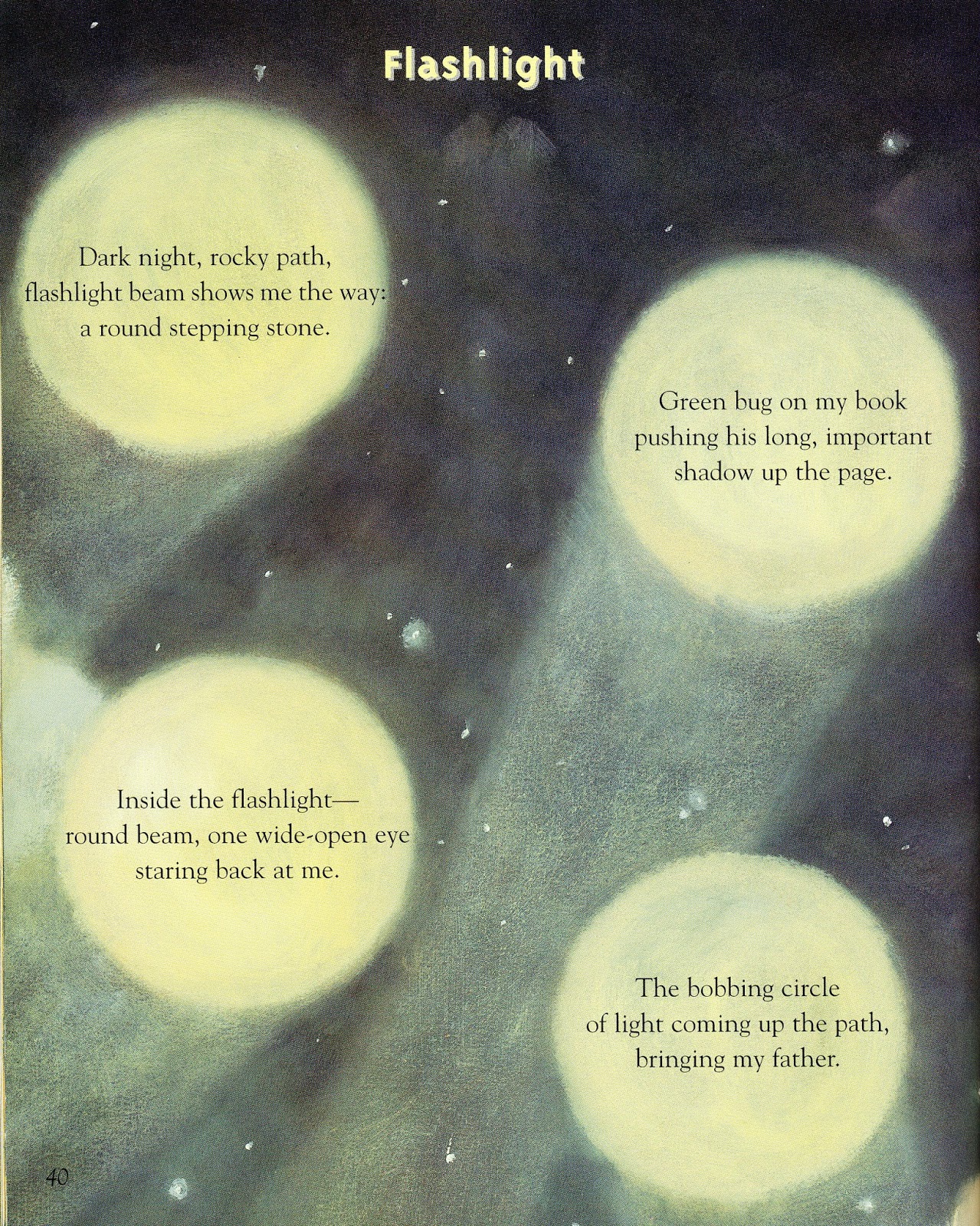 
A million thanks to Kristine for participating in my Jumping Into Form project this month.
Posted by Tricia at 12:01 AM