Parody is the imitation of a particular writer, artist or a genre, that is exaggerated deliberately to produce a comic effect.

The Poetry Archive defines parody in this way.

Parody is the imitation of the style of another work, writer or genre, which relies on deliberate exaggeration to achieve comic or satirical effect. It is usually necessary to be familiar with the original in order to appreciate the parody, though some parodies have become better known than the poems they imitate.

I've heard folks complain about parody, suggesting that this form is responsible for "dumbing-down" poems. I find this argument irritating. To write a successful parody, the author must have extensive knowledge of the original work. I believe that kids can find their way into poetry when they are hooked by a parody. Parody poems can help students make connections so that when they encounter a poet or classic poem later on, they will have some knowledge and background information to enhance their reading of it. 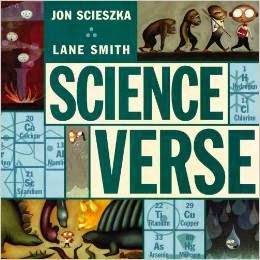 Science Verse (2004), written by Jon Scieszka and illustrated by Lane Smith, is a collection of science poems that parody poems by Joyce Kilmer, Lewis Carroll, Ann Taylor, Robert Frost and others, as well as nursery rhymes and childhood songs. It begins:


On Wednesday in science class, Mr. Newton says, "You know, if you listen closely enough, you can hear the poetry of science in everything."

Mr. Newton has zapped me with a curse of SCIENCE VERSE.

Poems parodied include "Trees" by Joyce Kilmer, "The Star" by Ann and Jane Taylor, "The Raven" by Edgar Allan Poe, "Jabberwocky" by Lewis Carroll, "Casey at the Bat" by Ernest Lawrence Thayer, "The Song of Hiawatha" by Henry Wadsworth Longfellow, "Paul Revere’s Ride" by Henry Wadsworth Longfellow, "A Visit From St. Nicholas" by Clement C. Moore, and "Stopping by Woods on a Snowy Evening" by Robert Frost. Here's an excerpt.

I think that I ain't never seen
A poem ugly as a spleen.

A poem to make you lose your lunch,
Tie your intestines in a bunch.

A poem all gray, wet, and swollen,
Like a stomach or a colon.

Something like your kidney, lung,
Pancreas, bladder, even tongue.

The book ends with our young hero waking from a dream, cured of his Science Verse. 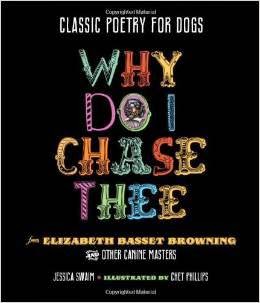 Classic Poetry for Dogs: Why Do I Chase Thee (2014), written by Jessica Swaim and illustrated by Chet Phillips, is a collection of parodies of classic poems told by a group of cultured hounds like William Shakespaw, Elizabeth Basset Browning, Edgar Allan Pug, and many others. You'll find poems like "Shall I Compare Thee to a Steak Fillet?," "Why Do I Chase Thee?," "The Maven," "Song of Me," "Sizing Up Shoes on a Soulful Evening," and many others. Each new section begins with an introduction to the hound-author.

Here is what Swaim writes about Emily Doginson.


Emily Doginson, a skittish saluki mix, loved to spy on passersby from the front window of her family's luxurious digs in Scramherst, Massachusetts. When visitors rang the doorbell, shy Emily retreated to her crate, refusing to emerge except for choice bits of chopped liver. Paper-trained from an early age, she wrote copious letters to the world, most of which were returned for insufficient postage. Ultimately, she selected her own society, then shut the doggy door.

And here is one of Emily's poems.

Skunk is the Thing With Stink Bombs

Skunk is the thing with stink bombs
That leads a merry chase,
Then turns around and flicks its tail
And squirts me in the face.

Bath is the thing with soapsuds
And water cold as ice.
I wonder as I'm shivering,
Why was I hoodwinked twice?

Edgar Allan Poe's Pie: Math Puzzlers In Classic Poems (2012), written by J. Patrick Lewis and illustrated by Michael Slack is a collection of cleverly disguised math problems in the form of parodies of classic poems. Can you guess the classic that inspired this poem?

Once upon a midnight rotten,
Cold, and rainy, I'd forgotten
All about the apple pie
Still cooling from the hour before.
I ignored the frightful stranger
Knocking, knocking . . . I, sleepwalking,
Pitter-pattered toward the pantry,
Took a knife from the kitchen drawer,
And screamed aloud, "How many cuts
Give me ten pieces?" through the door,
The stranger bellowed, "Never four!"

Go ahead, draw a circle and give it a try! The answer can be found upside-down on the opposing page. (Look it up or figure it out because I'm not telling!) Mathematically you could use four cuts, however, the pieces would not be equal in size.

Here's one more to whet your appetite. Yes, it contains fractions, but be brave!

When an elephant sat down to order
A half of a third of a quarter
Of an eighty-foot bun
And a frankfurter, son
Was it longer than three feet, or shorter?

Since I'm highlighting J. Patrick Lewis at the end here, let me follow up with a few more poems. Pat was kind enough to share some parody poems he is working on for a new collection. The original is presented first, then Pat's parody.

The world is so full of a number of things,
I’m sure we should all be as happy as kings.

The world is so full of a number of dreams,
I’m sure all our pillows should burst at the seams.


“Hope” is the thing with feathers
That perches in the soul
And sings the tune without the words
And never stops at all.

Grief is the thing with tissues
For mopping up the tears,
So that when you’re in bed at night,
They won’t fill up your ears.


If you are interested in learning more about parody poems, here are a few resources.
That's it for parody. I'll see you back here tomorrow for poems of apology.
Posted by Tricia at 12:01 AM