I know I've been celebrating poetry all this month, but I couldn't let another day go by without celebrating the beauty that is Brian Floca's new book, Moonshot: The Flight of Apollo 11. 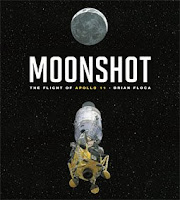 If I had to describe this book in one word it would be exquisite. The text is lyrical, immediate, and makes me feel all the anticipation I felt as a child, huddled around our black-and-white television in the living room. I got chills (and a bit teary-eyed) reading this excerpt near the end of the book. It is accompanied by an illustration of a family in a very 60s living room, gathered around a television and cheering. Dad has removed his glasses and is wiping his eyes.

But wait, I'm getting ahead of myself. Let's go back to the beginning. The book opens with a illustration of an open field at dusk with a crescent moon in the sky. The page opposite reads:

High above
there is the Moon,
cold and quiet,
no air, no life,
but glowing in the sky.

On the next page there is a series of illustrations of the Apollo astronauts suiting up.

Here below
there are three men

who close themselves
in special clothes,

who--click--lock heads
in large, round helmets.

Do you see what I mean about lyrical text? It sits on the fence between prose and poetry, conveying factual information in a remarkably easy manner. Readers follow the astronauts to the launchpad, watch them squeeze into Columbia, follow the GO/NO GO check at mission control, countdown and LIFTOFF!

The illustrations are nothing short of amazing. The countdown sequence spread contains a series of panels that moves from the crowds gathered on the beach to watch, to the engines firing, the rocket at the launchpad, the faces in the crowd, one final image of the rocket held in place, and finally a closeup of the astronauts strapped in at the zero count. (You can see a picture of the astronauts on Brian's blog.) The liftoff page (next) shows a closeup of the fiery engines pushing away from the ground as debris falls all around. The detail in the illustrations of Mission Control, the inside of both Columbia and Eagle, and the moon in the sky can be studied at length. There is so much to see!

My favorite pages are those of the astronauts on the moon. One of the final spreads shows the surface of the moon with the Earth in the sky. The text reads:

. . . high above
there is the Earth,
rushing oceans, racing clouds,
swaying fields and forests.
Family, friends, and strangers,
everyone you've ever known,
everyone you might--
the good and lonely Earth,
glowing in the sky.

The text ends where the moonshot did, with the splash landing and of the capsule and the return of everyday joys. There is an extensive end note in the back matter that describes the space program, preparations for the moonshot, the actual Apollo 11 flight, and missions that followed. Brian also provides and extensive list of sources used in the creation of the book on the copyright page. The front endpapers include a number of detailed and labeled illustrations of the launch vehicle and command modules, as well as other aspects relating to the launch and flight.

Moonshot is a thoughtfully written and beautifully illustrated book. I encourage anyone who believes that nonfiction is boring to pick up this book and see what absorbing, entertaining nonfiction looks like. I'll say it again. This is an EXQUISITE book and a must have for anyone interested in science, US history, or the space program. Heck, it's a must have for everyone. Highly recommended!

P.S. - Check out the coloring pages at Brian's web site! Also, SLJ has a wonderful interview with Brian where he talks about his process and shares some of the artwork.