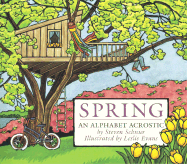 When I was teaching I noticed that many teachers asked students to write acrostic poems. Sometimes about their names, or the topic they were studying, these acrostic studies were merely lists of descriptive words or phrases. Poetry they were not. When I found Steven Schnur's series of alphabet acrostic books on the seasons, I was overjoyed. These were REAL poems, each one a complete thought about the subject. I use all four of these books in my teaching, and just knew I needed to interview Steven.

However, in my early e-mail communications with Steven he wrote "I would be happy to participate in your series but don't really think of myself as a poet. Though some have called my acrostic books poetry, I think of them as word play, as solutions to problems of verbal geometry." I was intrigued by this response, so I altered my questions a bit to better "fit" Steve's view of himself as a writer. Here's what he had to say.

***************
How did you get started writing?
Steve: I began writing at the age of 8 in third grade, shortly after being introduced to E.B. White's recently published novel, "Charlotte's Web." I was so captivated by the tale and the naturalness and ease of exposition--my previous writing model had been Stevenson's "Treasure
Island,"--that I immediately sought to imitate it and have been attempting to do so ever since in one way or another. White remains one of my literary idols.

Who/what made you want to write?
Steve: Other writers made me want to write. I was fascinated by what happened to me during story hour in class or at home: my total concentration and absorption in the tale. I wanted to exercise that same power upon an audience. Two years later, in 5th grade, I was fortunate to have a teacher who cultivated that interest, encouraging us all to write weekly stories and read them before the class. The experience was exhilarating.

What got you started writing for children?
Steve: Fatherhood was a primary catalyst in my writing for children. I wanted to be able to put my own books in the hands of my kids. One of the most gratifying experiences of my writing life was to hear my newly published novel, "The Shadow Children," read to me by my ten-year-old daughter.

In your e-mail you wrote "Though some have called my acrostic books poetry, I think of them as word play, as solutions to problems of verbal geometry." Can you talk a bit about the challenge of creating these books?
Steve: I set myself several simultaneous challenges in the acrostic books: I wanted to dramatize key events in each season through the alphabetic progression of words and to create little puzzles with each acrostic, describing without ever using the vertical acrostic word. Additionally, I wanted each acrostic to be as spare and succinct as possible, using as few words per line as necessary to convey the meaning. And I wanted to avoid the usual, hackneyed alphabet words, especially when it came to letters Q, X, and Z.

Can describe your writing process?
Steve: Until recently, I wrote every day, sitting down at the computer between eight and nine each morning, pausing briefly for lunch, resuming until dinner, and often continuing until midnight. I always worked on several manuscripts simultaneously, writing new copy in the morning, revising old copy at night, shifting from one work to another as mood and inspiration dictated, shuttling between adult and children's books. Lately, however, I have returned to an early love, photography, and have begun exhibiting my work and creating photography books with and without text. After almost forty years of uninterrupted writing, the camera comes as a welcome relief.

What are the things you enjoy most about writing for children/young adults?
Steve: I loved the playfulness inherent in writing the acrostic books. And I enjoy the opportunity to introduce young readers to important historical events and characters, and to animate those events and characters with language of my own choosing.

Do you have a favorite among all the books you have written?
Steve: "The Shadow Children" has been responsible for getting me out in the world more often than any of my other books, taking me as far afield as a remote mountain village in central Italy where I accepted a prize awarded by the children of the district. For that and the many other encounters it engendered, I'll always be especially grateful.

Would you like to share the details of any new poetry project(s) that you’re working on?
Steve: I'm currently revising three works for adults: "Raising Twins," about the harrowing and endlessly entertaining first year of my life as the father of boy and girl twins; "Civil Twilight," essays about minor moments that carry great emotional impact; and "New York, New York," a photography portfolio.

Your favorite place to write?
Steve: On my back porch, looking over an adjacent swamp, listening to the chirp of red-wing black birds and the shouts of children playing at the nearby elementary school, and watching the weather change.

Favorite quote on writing/poetry?
Steve: "Writing is a life sentence." No attribution. (Perhaps I coined it.) It's simply a statement of fact.

***************
Steven gave readers something remarkable in his acrostic books. The poems are deftly created and can serve as terrific mentor texts for student writers. Since we're finally into the season, I thought it would be appropriate to share a few poems from the Spring: An Alphabet Acrostic. The poems in this book cover topics from April to zenith.

After days of
Pouring
Rain, the last
Ice and snow finally
Leave the earth.

Egrets, ducks and
Geese nest in the marsh
Grass, waiting for their
Shells to hatch.

Nestled under the
Eaves, a
Song-filled ark of
Twigs and grass.

All four books are equally strong and beautifully illustrated by Leslie Evans. You can view some of Evans' illustrations in the series, as well as read some of the poems they accompany at the Picture Book Directory of Children's Illustration.

If you haven't seen these books, I do hope you'll take a look. They are tremendous examples of acrostic poetry at its best.

Thanks to Steven for participating in the Poetry Makers series. BTW, today is Steven's birthday, so if you see him around, wish him a very happy day!

All poems ©Steven Schnur. All rights reserved.
Posted by Tricia at 12:01 AM