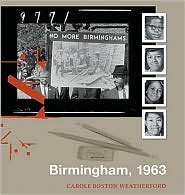 Carole Boston Weatherford has written more than 30 books since her first title appeared in print in 1995. Whether poetry or prose, her books bring the stories of the past to life. In her Reading Rockets video interview she said, "My mission as an author is to mine the past for family stories, fading traditions and forgotten struggles." So far I'd say mission accomplished.

I'm particularly fond of the poetry she writes that introduces us to real people and real events. Here's a poem Carole wrote that was inspired by William H. Johnson's painting Joe Louis and Unidentified Boxer. You can find it in Jan Greenberg's book Heart to Heart: New Poems Inspired by Twentieth Century American Art.

The radio gave folks a ringside seat
to cheer Joe Louis during his prize
fights;
twenty-three titles and but one
defeat.
Fans partied past dawn under neon
lights
as if their own clenched fists had
struck each blow.
They called Joe the Brown Bomber.
He attacked
big, bad opponents, threatened old
Jim Crow
who kept doors closed to hold his
people back.
He was a secret weapon in a war
to knock out hate. Joe bore a million
hopes
each time he punched a foe. He was
a star;
his stage, a mat set off by stakes
and ropes.
A left hook, a right jab, muscle and
grace;
Joe danced, and pride glowed on
every brown face.

Before I talk further about Carole's work, let's learn a bit more about her.

***************
How did you get started writing poetry?
Carole: I composed my first poem in first grade and dictated the verse to my mother. My father, a high school printing teacher, printed some of my early poems on index cards.

Who/what made you want to write?
Carole: I had a God-given talent. I dabbled in other creative endeavors—from art to fashion design—but writing would not be denied. To my ear, poetry makes music with words.

What got you hooked on children’s poetry?
Carole: As a child, I loved poetry. And when my own children reintroduced me to children’s literature, I gravitated toward poetry. I like to say that poetry is my first language. Poetry for young people tends to be more musical than that for adults.

Can describe your poetry writing process?
Carole: I always start with a subject, usually do some research and sometimes make a word list of nouns and verbs germane to the subject. When writing rhyming poems, I use a rhyming dictionary. When writing in free verse, I strive for the most appropriate voice.

What are the things you enjoy most about writing poetry for children/young adults?
Carole: I write poetry for people who love language as much as I do. So, I’m not just writing for a reader of a certain age, but for a reader with a certain sensibility or aesthetic as far as language is concerned.

Do you have a favorite among all the poems/poetry books you have written?
Carole: My favorite book is the fictional verse memoir Becoming Billie Holiday.

Would you like to share the details of any new poetry project(s) that you’re working on?
Carole: I am excited about the forthcoming picture book biography, Racing Against the Odds: The Story of Wendell Scott, Stock Car Racing’s African American Champion.

Your favorite place to write?
Carole: At a desk overlooking a body of water. But that never happens.

Favorite quote on writing/poetry?
Carole: Poetry makes music with words. (my own quote)

Your nominee for the next Children’s Poet Laureate?
Carole: Nikki Grimes

***************
I found my way to Carole's work while looking for materials to use in teaching about the history of African American schools. The book was Dear Mr. Rosenwald, a series of poems that tells the story of how one community came together to build a new school--a Rosenwald School. The narrative begins with this poem.

1921: One-Room School
My teacher, Miss Mays, said,
You can't judge a school
by the building. When the roof leaks,
she calls us vessels of learning.
When the floor creaks, she says
knowledge is a solid foundation.
Wind whistles through walls,
blowing the sheet that splits the church
into two classrooms. Me on one side,
Junior on the other. Till I passed
third grade, I sat beside him,
counting with my fingers
and fidgeting on the pew.
Now I know better.

My school is not much to speak of,
but Mama says I'm lucky
even if class don't meet during harvest.
Down here, she said, some black children
go to school in shacks, corncribs,
or not at all. Don't know what I'd do,
if I couldn't go to school.

Harvest break--
just when I memorized the times tables.
Instead of learning long division,
I'll be working in the field.

From the very beginning, the heart, the dreams, and yearning of people longing to be educated comes through. As told by Ovella, a young girl in the community, we meet dedicated people who put their blood and sweat into backbreaking work that doesn't earn a decent living, and then see them spend that money for the good of the community. We see families and communities at work, at home and church, coming together for the common good. You see, Rosenwald schools were only partially funded through grants from the rural school building program. The balance came from the community. This meant that hard-working, poor folks needed to raise money, acquire land and build that school.

Ultimately, the story told in Dear Mr. Rosenwald is a triumphant one. You can hear Carole read some of the poems from the book in this piece on North Carolina Public radio . You can also learn more about the book by reading Poetry in the Classroom - Dear Mr. Rosenwald.

Birmingham, 1963 (2007) is a book of poems told from the point of view of a fictional 10-year old girl who attended the Sixteenth Street Baptist Church and was present on the day of the bombing. This book was awarded the Lee Bennett Hopkins Poetry Award and was an honor recipient of the Jane Addams Children's Book Award. The emotionally packed poems are accompanied by photographs from the Civil Rights Movement and the site of the bombing. Here's how the book opens.

The year I turned ten
I missed school to march with other children
For a seat at whites-only lunch counters.

Like a junior choir, we chanted "We Shall Overcome."
Then, police loosed snarling dogs and fire hoses on us,
And buses carted us, nine hundred strong, to jail.

On the page facing this poem is a photograph of a young black girl holding a sign that reads "CAN A MAN LOVE GOD and HATE HIS BROTHER?"

A bit further into the text, after learning more about the narrator, we come to the event. On the page opposite the poem is a picture of a Klansman.

The day I turned ten
Someone tucked a bundle of dynamite
Under the church steps, then lit the fuse of hate.

The final poem in the narrator's story is this.

The day I turned ten,
There was no birthday cake with candles;
Just cinders, ash, and I wish I were still nine.

The book ends with poems of tribute to each of the four girls killed in the explosion: Addie Mae Collins, Cynthia Wesley, Denise McNair, and Carole Robertson. The back matter includes an author's note on the civil rights struggle in Birmingham and the September 15th bombing. I've been pairing this work with Christopher Paul Curtis' novel The Watson's Go to Birmingham, 1963 , which briefly touches upon the event. 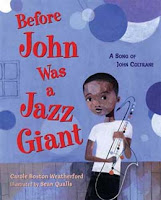 Two of Carole's recent works are grounded in jazz. Before John Was a Jazz Giant: A Song of John Coltrane and Becoming Billie Holiday were both 2008 Cybils nominees, the former in the nonfiction picture book category, and the latter in the poetry category. Before John Was a Jazz Giant is a picture book biography that is a poetic tribute to Coltrane. The text is rhythmic and and fully conveys the feel of jazz. Here's how it begins.

Before John was a jazz giant,
he heard hambones knocking in Grandma's pots,
Daddy strumming the ukulele,
and Mama cranking the phonograph.

Before John was a jazz giant,
he heard steam engines whistling past,
Cousin Mary giggling at jitterbuggers,
and Bojangles tap-dancing in the picture show.

Becoming Billie Holiday is a fictional verse memoir that tells the story of Holiday's life from birth through age 25. The poems carry titles from Billie’s songbook. The writing is tender and vivid, matter-of-factly portraying the ups and downs that dominated the singer's life. Here is one of the poems from this book.

How Deep Is The Ocean

Without the microphone
there would be no spotlight,
no band backing me
with bluesy swing.

If you haven't seen these two books, I highly recommend you look for them. They are vastly different, but both inspiring portraits of the artists.

One additional book of Carole's that came out last year is also a picture book biography told in verse. You can learn more about it at Nonfiction Monday - I, Matthew Henson: Polar Explorer.

I'd like to close this with the video poem Carole created for the inauguration of President Obama. The images are great, but it's Carole's recitation of the poem that gets me. After all, poetry is not just meant to be read, it's meant to be heard.

If you'd like to learn more about Carole and her work, check out the sites below.
Many, many thanks to Carole for participating in the Poetry Makers series.
All poems ©Carole Boston Weatherford. All rights reserved.
Posted by Tricia at 12:01 AM