Author, poet, anthologist, teacher—these are all hats that Paul Janeczko wears. As a supporter of reading and writing poetry in the classroom, Paul has strong views and great ideas on how to get kids excited about poetry. In a 1997 interview with The ALAN Review, Paul said:

If we want kids to be readers of poetry, we have to be readers of poetry ourselves. Most of the teachers I meet are not. Every single time I do a workshop for teachers, many tell me afterwards that poetry is their worst area. They tell me they want to include poetry in their programs, but they just don't know what to do with it. Well, let's face it, poetry does demand more. It demands that we read differently, but that shouldn't scare us away. When I work with teachers, I especially like to use "A History of the Pets" by David Huddle, which I included in Pocket Poems. After I read the poem, I say, "What does this poem mean?" Naturally, my audience becomes a little uneasy. Then I tell them that the poem doesn't mean anything; it simply is.

Since this article was published, Paul has authored and/or edited nearly 20 new books. Among them you'll find books with cowboy poems, baseball poems, friendship poems, books on how to write poetry, and much more. One of my favorite books published during this time is Seeing the Blue Between: Advice and Inspiration for New Poets. In it Paul collected advice and poems by some terrific poets for young people. Here's an excerpt from the introduction.

Young poets who read my books often write to me with that question. I usually tell them to do two things: write a lot of poetry and read a lot of poetry. The letters and poems I've assembled in Seeing the Blue Between should add one more thing to every young writer's "to do" list: listen to the advice of poets who have spent years practicing their craft.

I hope the poets in this book inspire you. And I hope you learn from their words. I know that I have. I've learned that there is always something new to try with my writing. I think that's part of the kick of writing—trying something new and seeing what happens when we do.

Paul has a gift for collecting and connecting the work of others in meaningful ways. As much as I love Seeing the Blue Between, I must say that I'm just a bit disappointed that Paul didn't include himself among the pages of advice and inspiration! Instead, you and I will have to be inspired by the thoughts he has shared in this interview.

Who/what made you want to write?
Paul: I wanted to tell stories, and I liked the way stories could be told in poems.

What got you hooked on children’s poetry?
Paul: If I had to pick one thing that hooked me a kids’ poetry, it was the delicious wordplay that I discovered in the work of poets like Pat Lewis, X.J. Kennedy, John Ciardi.

Have you had any formal poetry training? If not, how did you learn to write what you do?
Paul: I have no formal training in poetry writing. I learned by reading, reading, reading…and then writing.

Can describe your poetry writing process?
Paul: The longest part of the process is the gathering: watching, paying attention, observing, jotting notes, making lists of my favorite words. Lots of gathering. But beyond that, I would guess that the process that I go through is very similar to the process that other writers go through. I draft and then rewrite. Then rewrite again. And again. I know that sounds un-glamorous, but much of the writing process is un-glamorous.

What are the things you enjoy most about writing poetry for children/young adults?
Paul: Telling stories, fooling with words, producing a poem that will touch a kid.

Do you have a favorite among all the poems/poetry books you have written?
Paul: My sentimental favorite is That Sweet Diamond, my book of poems about baseball. That’s because it was close to a religious experience for me. As a writer, my favorite is Worlds Afire, my book about a circus fire that struck the big top in Hartford, CT, in 1944. That was the first book of poems I wrote based on a historical event.

Would you like to share the details of any new poetry project(s) that you’re working on?
Paul: I am working on a book of poems set in the Nazi concentration camp in Terezin, in what is now the Czech Republic.

Your favorite place to write?
Paul: At my desk, although writing on our deck is often a close second.

Favorite quote on writing/poetry?
Paul: Samuel Beck said, “Try again. Fail again. Fail better.” I’m not sure he was talking specifically about writing, but it certainly applies to writing.

Your nominee for the next Children’s Poet Laureate?
Paul: I’ll pass on that one. There are so many talented men and women writing poetry for kids, that I wouldn’t want to single one out above the others. 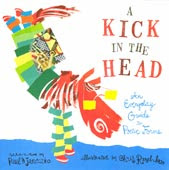 I'm particularly fond of the books Paul has created in collaboration with Chris Raschka—A Poke in the I: A Collection of Concrete Poems (2001), A Kick in the Head: An Everyday Guide to Poetic Forms (2005), and the newest title, A Foot in the Mouth: Poems to Speak, Sing, and Shout (2009). These anthologies present an enormous range of poetic forms and poets.

A Poke in the I contains concrete poems, so I can't easily reproduce them here. Suffice it to say that the poems collected by Paul are inventive, fun, and smart. A Kick in the Head is one of the books I turn to regularly when I want examples of specific forms. Here's a cinquain Paul wrote that is included in this volume.

Oh, cat
are you grinning
curled in the window seat
as sun warms you this December
morning.

You'll also find this most wonderful acrostic written by Paul. In a few lines there is so much truth! (I'm a dog lover, you see!)

Another anthology of Paul's I love is called Dirty Laundry Pile: Poems in Different Voices. In the introduction Paul writes:

I collected the poems in this book because I love reading poems written in the voice of an object or an animal, as if that thing or creature were speaking to me. In these persona or mask poems, as they are called, the poets let their imaginations fly and feel what it might be like to be a mosquito, a crayon, a kite, a turtle. It's something like wearing a Halloween costume or playing a part in a school play. Great fun, don't you think? As you read these poems, if you find yourself wondering what it would feel like to be a caterpillar, a soccer ball, or a honeybee, grab a pencil and let your imagination fly in a poem. Let that new voice sing!

In this book you'll find poems like "The Vacuum Cleaner's Revenge," "Scarecrow's Dream," and "Prayer of a Snowflake." This book is a terrific selection for using with kids learning to write mask poems. I like not only the variety of poems included, but the fact that from the very beginning, Paul encourages kids to write their own poems.

I'd like to share one more poem of Paul's before leaving you to think about how much he has given the world of children's literature. This one can be found in his book The Place My Words Are Looking For: What Poets Say About and Through Their Work, a collection Paul edited that contains the poems, advice, anecdotes, and recollections of 39 poets.

Saturday night
Dad washed, I dried
the supper dishes
while Mom armed herself
for Early Bird bingo at seven
in the church basement:
her lucky piece
(a smooth quarter she'd won the first time out),
seat cushion,
and a White Owls box of pink plastic markers.

Dad read the paper
watched TV with me
until Mom returned,
announcing her triumph with a door slam
and a shout
"I was hot!"

Flinging her hat,
twirling out of her jacket,
she pulled dollar bills
from her pockets
before setting them free
to flutter like fat spring snow.

I'm going to close with Paul's answer to the question "Why do you think is it so important to read poetry?" (The emphasis is mine.)

Anatole Broyard, who used to write for The New York Times, said that, if we don't read poetry, we won't have our hearts broken by language, which to his way of saying that thinking is one of the prerequisites of a civilized world. You know, a good poem can put you in touch with strong emotions. Philip Booth once said that poetry brings us closer to what it means to be alive. There's also James Dickey's famous assessment of poetry, that poetry is "just naturally the greatest goddamn thing that ever was in the whole universe." A good poem is like a booster shot of humanness. We need more of that. I think that's the "so what" of poetry.

If you want to learn more about Paul and his work, check out these sites.
Finally, if you're interested in some lesson ideas for writing poetry in your classroom, check out Paul's book Teaching 10 Fabulous Forms of Poetry: Great Lessons, Brainstorming Sheets, and Organizers for Writing Haiku, Limericks, Cinquains, and Other Kinds of Poetry Kids Love. It has reproducible forms, example poems, and lots of helpful tips.

Hats off to Paul for participating in the Poetry Makers series.

All poems ©Paul Janeczko. All rights reserved.
Posted by Tricia at 12:01 AM