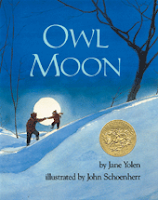 Quick! Let's play a game of word association. I say Jane Yolen, you say __. I did this exercise with a random sample of friends and teacher types and the answers I got included The Devil's Arithmetic, How Do Dinosaurs Say Goodnight?, and Owl Moon. Much to my dismay, the list of responses included not a single poetry title. Okay, the sample was small (n=23), but still, no poetry. To be fair, if you had asked me this question 10 years ago, my answer probably would have been Owl Moon as well.
To date, Jane Yolen has published more than 300 books (latest LOC data is 315) in many different genres. It's not surprising then that poetry isn't the first thing that people think of when they think about her work. However, it's what I think of most these days. Before I talk about Jane's poetry, let's learn a bit more about her.

***************
How did you get started writing poetry?
Jane: I started (badly) in first/second grade with school poems poorly scanning and awkwardly rhymed. But hey—I was only seven. Give me a break.

Luckily I improved along the way. By high school, I had some poems in the literary magazine. By college—taking a poetry class with Anthony Hecht and a special studies with Marie Borroff—I improved some more and by senior year won all the poetry awards Smith College gave. Though much of the poetry I wrote at the time was wholly ironic and concerned with one of the following topics: virginity, death, torture, war, and body image.

Who/what made you want to write?
Jane: I came from a family of writers, so that seemed to be fated. But I was the only poet (though my brother wrote song lyrics for his bluegrass band.)

What got you hooked on children’s poetry?
Jane: Accident which may or may not have been part of some Greater Design.

Have you had any formal poetry training? If not, how did you learn to write what you do?
Jane: I was an English Lit major at Smith. Afterwards, living in NY (making a living such as it was by being a children’s book editor) I took a poetry course with Stanley Kunitz. He was already older than dirt, as were all the other writers there. I was the youngest by a matter of centuries, and so became everyone’s pet. Later on, when I was teaching children’s book writing at Centrum Writer’s Conference, I wrote a bit of the poetry assignments that Marvin Bell and Sam Hamill were handing out to their poetry students. That’s about as formal as it ever got.

Can describe your poetry writing process?
Jane: Like all my writing, it takes sitting down, fingers on the keys, and away I go. But whatever goes down first doesn’t last. I then do the revising, refining, revisioning, rewording, recalculating, remaking of every single line. As John Ciardi used to say, “A poem is never finished, it’s abandoned.”

What are the things you enjoy most about writing poetry for children/young adults?
Jane: I can help them see the world anew. I can put into words some of the longings, and lingering doubts, some of the puzzles and muzzled moments of their lives. I can give them songs to sing.

Do you have a favorite among all the poems/poetry books you have written?
Jane: Three are particularly special to me right now. (Ask me on another day. . . .and the answer will be different.) THE RADIATION SONNETS (Algonquin) for adults, because it charted the 43 days of radiation my husband went through with his first bout of cancer. It was how I kept myself together for him. DEAR MOTHER/DEAR DAUGHTER (Boyds Mills) because I wrote it with my daughter Heidi Stemple (the OWL MOON girl) when she was grown, and we just went back and forth on the poems, a kind of dueting, like owls in the night. And my latest book of poetry with photographer son Jason Stemple, A MIRROR TO NATURE (out this spring from Boyds Mills) because it is still so new. Of single poems: the first poem in THE RADIATION SONNETS, the Green poem in COLOR ME A RHYME, the Woodpecker poem in FINE FEATHERED FRIENDS and the poem "Angels Take Themselves Lightly" in AMONG ANGELS.

Would you like to share the details of any new poetry project(s) that you’re working on?
Jane: You will be sorry you asked!

With J, Patrick Lewis: TWINSPIRATION (which may not end up the title) for Candlewick, poems about twins. Pat is a twin and I am the grandmother of twins, the niece of twins, and the sister-in-law of twins. Also with Pat a book in verse about the life of Chagall (Creative Editions) and LAST LAUGHS: Animal Epitaphs (Charlesbridge.)

With Andrew Fusek Peters and anthology of lullaby poems for Candlewick. I am spacing on the title.

Two more nature and photography books with Jason for Boyds Mills: BIRDS OF A FEATHER (more bird poems) and BUG OFF (bug poems). 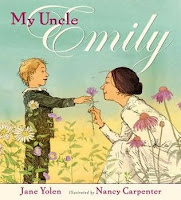 And a bunch of picture books in rhyme, including MY FATHER KNOWS THE NAMES OF THINGS (S&S), HOW DO DINOSAURS SAY I LOVE YOU (Scholastic), THE SCARECROW’S DANCE (S&S), NOT ALL PRINCESSES WEAR PINK (S&S) and a number more. Plus a picture book ABOUT Emily Dickinson though it is not a poem, MY UNCLE EMILY from Philomel.

Oh—and six of my adult Emily Dickinson sonnets have been set to music by Jerry Noble, a composer in Northampton, Mass and just premiered at Smith College on Valentine’s weekend.

In 2007 Jane and Andrew Fusek Peters selected the poems for the anthology Here's A Little Poem: A Very First Book of Poetry. Illustrated by Polly Dunbar, the book is a real gem and a terrific introduction to poetry for the preschool set. Poems address swings, kites, mud, bugs, rain, grandmas and grandpas, baby brothers, good night kisses, ice cream and more. In addition to this book, Jane has also put together poetry anthologies on topics as varied as animals, city life, nature, sleep rhymes and more.

While a few of Jane's poems are included in her anthologies, it is the collections of her poems that I enjoy most. The poetry she has written to accompany her sons photos are some of my favorites. Titles include Color Me a Rhyme, Count Me a Rhyme, Shape Me a Rhyme, Fine Feathered Friends, Wild Wings, and more. Their newest collaboration is A Mirror to Nature: Poems About Reflection. The photographs are simply gorgeous, and in the introduction, Jane encourages readers to to look at things differently. Here is what she says.

Something new to look at: that is another way of defining the word reflection. To reflect on something is to give it a deep and different look., to think about it in a new way. So, linger over these photos, contemplate the poems, see if together or separately they make you think again, make you reflect.

Each of the poems in the book is also accompanied by a short informational blurb. Here's one of my favorites.

Such a quirky
water bird.
It's duplication
is absurd,
reminding us
that nature's sense
of humor's strange—
and quite immense.

While several of the poems in the book are about birds (a seemingly favorite topic of Yolen's), there are also poems on the raccoon, alligator, deer, snail, cockle, frog, and coyote.

I am also quite fond of the poems in the book Raining Cats and Dogs. Half the book is upside down, so readers can find cat poems in one direction, dog poems in the other. The poem from this one will tell you which team I root for in the dog vs. cat debate.

I think of you, I think of bones
The tooth-marked cords of telephones,
The loose ends of upholstered chairs,
A slipper with the heel in tears,
A rubber ball, a mangled sock,
The splintered mass of baby's block.
These valentines you leave around,
Signed: "Love from me, your favorite hound."

I do love you, you know, despite
The signature of doggy bite.
And I look forward to the days
You show your love in other ways.

I could pull any number of Jane's books off my shelf and share many wonderful poems, but I'll include just one more here. This is from the book Bird Watch.

A showy gesture
on autumn's stage.
A brilliant blot
on winter's page.
A witty comment
on early spring.
And summer's own
bright darling.

I want to end this by sharing Jane's thoughts about poetry. Here's what she wrote in Paul Janeczko's book Seeing the Blue Between: Advice and Inspiration for New Poets.

Poets often try
to define poetry,
and end up writing poems to do it. It is that hard. In a long poem I wrote among other things that a poem is:

Emotion surprised.
Throwing a colored shadow.
A word that doubles back on itself, not once but twice.
The exact crunch of carrots.
Precise joys.
The reason we can't define it is that definition and poem both take words. And words are as slippery as fish. Ever watch a bear try to catch a fish? That's a poet, big and clumsy, with strong claws and jaws, after a silver slipcased fish that—once caught—lies lumpen on the shore.

If you want to learn more about Jane and her work, visit these sites.
I'm thrilled Jane agreed to participate in the Poetry Makers series. Moran taing, Jane! (For those of you who don't speak Scottish, that means many thanks!)

If you've read this far, you now have the opportunity to win a signed copy of How Do Dinosaurs Learn to Read? in paperback. (This is a school market edition.) You have until midnight tonight to leave a note in the comments. On Friday morning I will put the names in a hat and let William pick a winner.

All poems ©Jane Yolen. All rights reserved.
Posted by Tricia at 12:01 AM