In recognition of National Poetry Month, Morning Edition's Renee Montagne talked with Karen Jo Shapiro on Tuesday about her poetry books. In the story Author Makes Famous Poems Fun For Kids, Shapiro reads some of her work and talks about her poetic parodies. 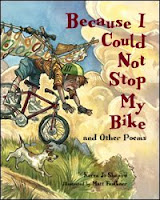 I enjoyed the story and the exercise of guessing which famous poem each parody was based on. After listening I read through the comments, which were highly polarized. Here are a few examples (both in favor and against).
I found this whole conversation about "dumbing-down" poems both fascinating and irritating. Since when is parody dumbing-down? Frankly, to parody well you need extensive knowledge of the original work. I think kids, particularly those in middle school could really exercise some poetic muscle by writing parodies of their own. I haven't seen the books (yet), but they seem like they might make wonderful mentor texts.

During the interview when Shapiro was asked what kids would get out of these poems, she responded this way. (My apologies for the punctuation. I was typing while listening and a transcriptionist I am not!)


I always meant the books to work on two levels at the same time, and so, the poems stand alone. I go in and read them to kindergartners, first graders, second graders who have never heard of William Shakespeare and they just appreciate the funny story, eating ketchup or eating macaroni and cheese and they appreciate it at that level. But what I wanted to give them that was extra is that it has these beautiful meters and rhythms taken from such wonderful writers like Edgar Allan Poe . . .

The older kids, the middle schoolers that are just starting to learn about some of these famous poets, it kind of gives them an entryway or a way to connect with poets whose language is often difficult, and so this gives them a way to see that they can connect to poems in a more familiar way.

You can learn more about these titles by clicking on the images above. Teachers will find that they can download the full text of the original poems (in PDF format) that inspired the parodies for both I Must Go Down to the Beach Again and Because I Could Not Stop My Bike.

To hear a few more of these poems, listen to this podcast from LAPL (Los Angeles Public Library). For more information about the author, visit her web site.

So, what say you dear readers? How do you feel about such parodies? Inquiring minds want to know.
Posted by Tricia at 12:15 PM