The winners of the 2009 Jane Addams Children's Book Award have been announced. The awards are given annually to the "children's books published the preceding year that effectively promote the cause of peace, social justice, world community, and the equality of the sexes and all races as well as meeting conventional standards for excellence."
Winners 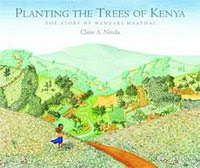 Planting the Trees of Kenya: The Story of Wangari Maathai,
written and illustrated by Claire A. Nivola

Ain't Nothing But a Man: My Quest to Find the Real John Henry, written by Scott Reynolds Nelson with Marc Aronson
The Shepherd's Granddaughter, written by Anne Laurel Carter
Posted by Tricia at 1:46 PM