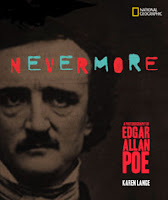 Since it's National Poetry Month, it seems only fitting that one of my book reviews be a biography of an author and poet. Nevermore: A Photobiography of Edgar Allan Poe, written by Karen Lange, is a fascinating look at a man who by all accounts lived a rather depressing life. The Foreword to the book begins this way.

Dead men pilot a ship. An aristocrat walls his enemy inside a secret crypt. A murderer hears the heart of his victim beating beneath the floorboards. A royal party is broken up by a spectral figure dabbled in blood. An Inquisition victim watches helplessly as a razor-sharp pendulum swings toward him. . . .

No author quite gets under a reader's skin like Edgar Allan Poe. His poems and tales can be wildly fanciful, but they are always psychologically truthful. He knew that, under the right circumstances, all of us can be tipped toward darkness, and he was brave enough to follow extreme states of mind—obsession, fear, rage—to their natural (and unnatural) ends.

You will learn much about Poe's sad life in this book, but there is a happy story to tell as well. The body of work he compiled, often against great odds, is still challenging and troubling, and yes, frightening us 200 years after his birth. No writer could ask for more.

Lange draws on a huge variety of references to weave together the details of Poe's life. The back matter of the book contains an extensive list of sources from which quotes were drawn, as well as a chronology, list of books, articles and web sites/places to visit, and a comprehensive index. Sources for the many illustrations and photographs are also included. The book is thoroughly researched and utterly readable. Despite the fact that his life was marked by tremendous loss and general poverty, the narrative is told in such a manner as to make the reader want to press on to find out how Poe managed to survive it all.

I found the cover photograph of Poe to be a disturbing look into the eyes of tortured soul. Here's what Lange tells us about that photo.

Poe in November 1848, less than a year before he died. He was at his saddest and most sickly, suffering from the effects of a suicide attempt and heavy drinking. Sarah Helen Whitman, whom Poe was courting, thought the photo captured the writer's journey to the "Ultima Thule"—Greek for "the limits of discover." In Poe's words: "a wild weird clime, that lieth sublime, Out of SPACE—out of TIME."

This biography of Poe provides an intimate view of the man, as Lange includes excerpts from Poe's letters and poems throughout the text. I found the dedication to Eureka, a 150-page essay on the mysteries of life, to be particularly moving.

"To the few who love and whom I love—to those who feel rather than those who think—to the dreamers and those who put faith in dreams as the only realities ... What I her propound is true:—therefore it cannot die ..."

That Poe lived a sad and difficult life is patently obvious long before the book's end. I found myself wondering if his work would resonate as much with readers today if his life had been different. Would his poetry have been as haunting if he had not suffered so much in life?

I can't say enough about how much I enjoyed this introduction to Poe. Not only is the text engaging, but the marriage of photographs, illustrations, and quotes make it quite a page-turner. Recommended with enthusiasm.

This post was written for Nonfiction Monday. This week our host is Terry at Scrub-a-Dub-Tub. Do stop by and see what others are sharing in the world of nonfiction today.
Posted by Tricia at 2:14 PM