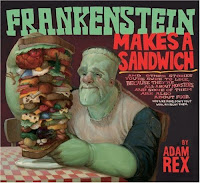 Yesterday I mentioned that the 2006 Cybils competition introduced me to the poetry of Julie Larios. My initiation didn't end there, however, because the Cybils also introduced me to Adam Rex. Rex's book Frankenstein Makes a Sandwich was a 2006 Cybils finalist in the poetry category. I fell in love with the book even BEFORE I opened it. That was due entirely to the subtitle on the cover.

And other stories you’re sure to like because they’re all about monsters, and some of them are also about food. You like food, don’t you? Well, all right then.

I stood in the bookstore laughing out loud, and then I opened the cover to read the flap copy.

You think you've got problems?
Dracula, Wolfman, Bigfoot—
now they have problems.
Monster-sized.
You try to address
Dracula's hygiene issues.
And don't even get me started
on the Phantom of the Opera.

Alright, already! So I bought it! I've been a fan ever since. Before I talk more about Adam's work, let's learn a bit more about him.

***************
How did you get started writing poetry?
Adam: It was almost guided by the illustration side of my career more than anything. I thought it would be nice to write a number of short pieces with a common theme (like monsters) that would be fun to illustrate. And rhyming verse, to me, was a way to make short, simple ideas more substantive. You look at the supposed “shortest poem ever written,”

Lines on the Antiquity of Microbes
Adam
Had ‘em.

and where would it be without that rhyme? I don’t think it would have its own Wikipedia page, anyway.

Anyway, so originally the verse I was writing was little more than a fun-illustration delivery system. And it was hard. I came close to just giving it up a few times, convinced that writing rhyming verse well was one of those innate neurological sideshow tricks, like being able to instantly anagram words or do math faster than a calculator. But eventually I noticed to my surprise that I was getting better at it, and I started enjoying it, and became mildly addicted to that feeling you get when you wrap up a poem with its theme and meter and rhyme scheme intact, like you’ve managed to get all the plates spinning at the same time.
Who/what made you want to write?
Adam: I don’t know how to answer that. I guess I don’t know what makes me want to write, I only know that I have to do it now. I haven’t always been this way.

I was just trying to recall when it was that I really started paying attention to the craft of writing–that is, when I noticed that good writing was not merely a question of inventing a good plot, but also characterization and word choice and the overall art of how one conveys the plot. And I think the earliest I noticed this sort of thing was while reading Douglas Adams Hitchhiker books, around age eleven. So I give him a lot of credit for putting me on this path.

Sorry, I know that answer doesn’t have a lot to do with poetry.
Have you had any formal poetry training? If not, how did you learn to write what you do?
Adam: I haven’t had any formal poetry training beyond what is afforded one in a decent public school education. As Billy Collins put it, I would “…tie the poem to a chair with a rope/ and torture a confession out of it.” I learned a bit about rhyme and meter. I think I’ve always had a good ear for the rhythm and meter of a poem–maybe everyone does. But anyway, verse that doesn’t scan has always sounded like a grade school marching band to me. So I really just learned how to do what I do by doing it.

Can describe your poetry writing process?
Adam: Not very well. I imagine it looks an awful lot like I’m trying to reconstruct a sales receipt out of a garbage bag of shredded paper.

I think Michaelangelo said of sculpture that the figure was already trapped inside the marble–you have only to chip away everything that isn’t David. Writing one of my poems isn’t like that at all.

What are the things you enjoy most about writing poetry for children/young adults?
Adam: Well, they seem to appreciate the effort more than adults do.

Do you have a favorite among all the poems/poetry books you have written?
Adam: I suppose I remain especially proud of "Dr. Jekyll and Mister Henderson" from Frankenstein Makes a Sandwich. I’m still a little surprised I got out of that one alive.

Would you like to share the details of any new poetry project(s) that you’re working on?
Adam: I think there’s a new collection in my future–I have a few half-finished poems in my sketchbook, and I trust more will come eventually. No monsters this time though–something new.

Pop Quiz!
Your favorite dead poet?
Adam: Oh, all the dead ones are great. Don’t make me choose.

Your favorite place to write?
Adam: Probably this café in West Philly called The Green Line.

Favorite quote on writing/poetry?
Adam: “Writing is easy: All you do is sit staring at a blank sheet of paper until drops of blood form on your forehead.” - Gene Fowler

Your nominee for the next Children’s Poet Laureate?
Adam: Huh. How about Douglas Florian?

***************
I'm quite fond of the poems and the variety of illustrations in Frankenstein Makes a Sandwich. Adam is right in his assertion that "Dr. Jekyll and Mister Henderson" is a gem. My favorite poem is this one.

Will someone please just tell him? It looks so undignified.
The zombies almost mentioned it. The Headless Horseman tried.
But when he sad, "Vhat are you staring at?" they lost their nerve and lied.

It's been stuck in there for hours now. It's getting kind of sick.
I would offer him a toothpick but he gets this nervous tic
if you ever come too close with any kind of pointed stick.

Well, really. Can you blame us if we don't know what to say?
His castle has no mirrors, so I guess it's there to stay.
What was a vampire doing eating spinach, anyway?

Another favorite of mine is the double-page spread cafeteria illustration, which has a number of very funny jokes masquerading in it. On a milk carton is the face of the Invisible Man with the line "Have You Seen Me?" next to it. The Wolfman is carrying a tray with a large helping of eyeballs and a foot. The message board over Frankenstein's shoulder contains this limerick.

Mitchel & Von Fuzz Sez:
It's well know that zombies abstain
From any food other than brain.
Make a hat from a carrot
And constantly wear it.
They'll never disturb you again.

All-in-all, this is one fun poetic romp through the world of monsters.

Adam followed up this work with Frankenstein Takes the Cake, a 2008 Cybils nominee in the poetry category. Here's the subtitle.

Which is full of funny stuff like rotting heads and giant gorillas and zombies dressed as little girls and Edgar Allan Poe. The book, we mean-not the cake.

Readers will find a similarly eclectic mix of illustrations, as well as the unfolding story of Frankenstein's wedding. Here's one of my favorite poems.

Tokyo summer.
Mothra flies into a sign
again and again.

An autumn rampage,
the sound of leaves and soldiers
crunching underfoot.

A winter wager:
Will Godzilla's tongue freeze to
Mechagodzilla?

I've had so much fun with Adam's monsters that I can't wait to see what's up next.

If you want to learn more about Adam and his work, visit these sites.
All hail Adam, King of monster poetry! Thanks too for participating in the Poetry Makers series.

All poems ©Adam Rex. All rights reserved.
Posted by Tricia at 12:01 AM